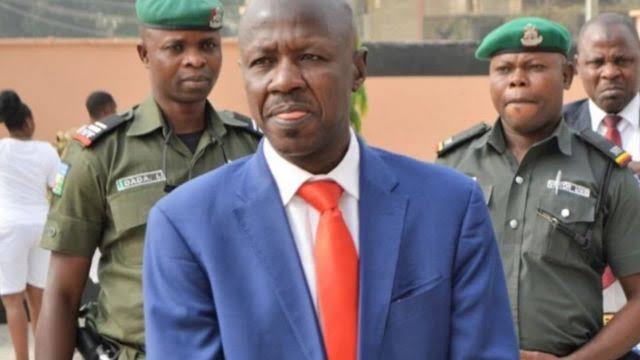 Ibrahim Magu, the suspended acting Chairman of the Economic and Financial Crimes Commission (EFCC) has denied planning on dragging the President Muhammadu Buhari administration to court over his detention.

Magu who was speaking through his lawyer, Wahab Shittu, stated that he would cooperate fully with the probe panel led by Justice Ayo Salami to investigate him.

The former EFCC boss said no publication should be attributed to him without clearance from him or his counsel on record.

Wahab Shittu said, “Our client appreciates the panel for ordering his release from custody even if the panel indicated it never ordered his detention at anytime in the first place. Our client appreciates the efforts of the Buhari administration in its commitment to the war against corruption including the ongoing probe being undertaken by the Hon justice Salami investigation panel.

“Our client acknowledges the widely respected integrity of Mr President and chairman of the probe panel, Hon Justice Ayo salami (Rtd), and is hopeful that the truth in his case will ultimately prevail. Our client urges Nigerians and the international community to continue to support the current administration’s quest to rid our society against graft.

“Our client takes his current travail with philosophical calmness without bitterness in the belief that no one is above the law, that no matter how big anyone is, the law is bigger. Our client pleads that no publication be attributed to him without clearance from him directly or his counsel on record.

“Our client will never be a party to any derogatory comments against this administration which he considers himself to be an integral part of, and the President he respects so much.

“Our client is not contemplating any legal proceedings against this government that has given him an opportunity to serve and for which he retains uncommon respect and admiration mainly because of the commitment of the administration to the anti-corruption crusade which he shares with passion.”