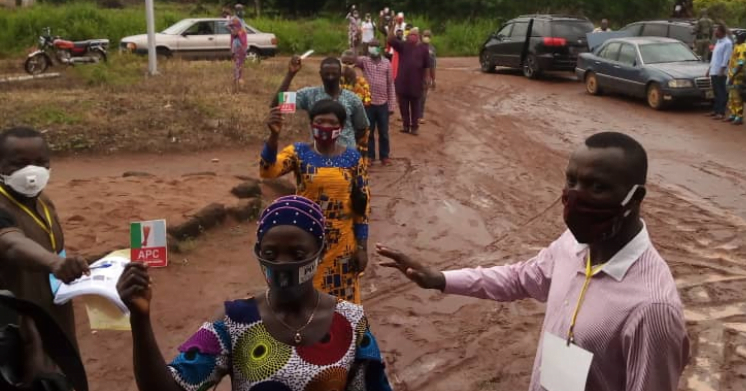 The Governorship primary election of the All Progressives Congress in Edo State has commenced in 192 wards across the state.

The mode of election adopted by the National Working Committee of the party was direct primary.

Information gathered revealed that the exercise recorded a peaceful turnout as voting commenced in some local government headquarters.

There had been speculations that the electoral process might not be allowed due to the differences between the party and the Edo State Governor, Godwin Obaseki.

The State Government had called on APC to apply for a waiver before organising a political gathering in any part of the state, but the party did not apply.

However, accreditation of card-carrying party members commenced at 8 am in batches of 15 and less from the 192 wards of the 18 local government areas of the state.

Some of the wards/LGA monitored were Ohuan, Uhi, and Isi North/Uhunmwonde, Ward 3/Egor and Ward 9/Oredo, Ward 7/Etsako East, among others.

All party members who came wearing face masks were seen maintaining arm’s length physical distance as they waited patiently to cast their votes.

The APC member thereafter voted for the candidate of their choice by signifying when the names of the three aspirants are mentioned.

The candidates are Pastor Osagie Ize-Iyamu, Dr Pius Odubu and Mr Osaro Obazee’s in that order.

The total votes for each aspirant were recorded to be forward to the ward collation centres where they are also recorded.

The results would be taken to the local government collation centres where the sorting of votes for each of the three aspirants have started with the result sheets from the wards, as of the time of filing this report.

The security process was guided by security operatives.