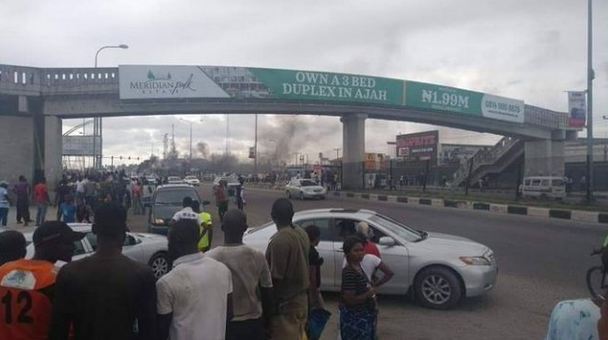 At least one person has been shot dead outside the Shoprite premises around Jakande, Lekki area of Lagos State, Nigeria’s commercial city, during a protest on the recent Xenophobic attacks on Nigerians in South Africa.

Naija News had reported earlier that properties including cars belonging to Nigerians in the country, were set ablaze by South Africans in the wake of the Xenophobic attacks.

Apparently displeased with the attacks, Nigerians took to Shoprite premises around Jakande, Lekki in Lagos to protest the  Xenophobic attacks.

Naija News learned that the aggrieved protesters stormed the complex located on the Lekki-Epe expressway, chanting violent songs with policemen on the ground preventing them from gaining access into the mall but the protesters lit bonfires.

It was gathered that the protesters also set up barricades around the complex, compounding the traffic situation along the ever-busy expressway.

Speaking on the development, the spokesman of the Lagos state police command, Bala El-Kana, said he could not give details of the attack.

“I don’t have any casualty figure, but I know there was a violent attack,” the spokesman of the Lagos state police command told TheCable on Tuesday.