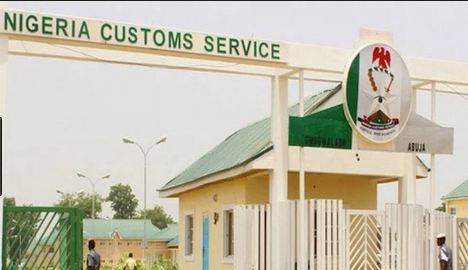 An officer of the Nigeria Customs Service (NCS) has been said to have allegedly received N200,000 from Olanrewaju Olasupo, a commercial driver before returning his vehicle which has been seized back to him.

The report states that the bus contains tomatoes and was seized by the men of NCS, Ijoun, Yewa-North Local government area, Ogun state on Monday.

Olasupo stated allegedly that he gave a bribe of N200,000 to an officer named Akin in Abeokuta command with no receipt after payment.

He said that he conveyed few traders to purchase tomatoes following the seizure of his vehicle in Ijoun.

According to Olasupo: “Before they (Customs officials) released the first goods, they collected N500 per bag of pepper and the money they collected from the woman who hired my vehicle was N23,000 for 43 bags.

“The remaining people that have baskets of pepper also paid N500. For my vehicle, they collected N200,000. They said that my offence was because I carried pepper from the border”.

“When we explained to them, they insisted and collected N200,000 from me after all the arguments on Tuesday.

“They did not tell us what the money is meant for; they only said that they will collect N500,000 before they can release my vehicle. But, I begged them till they agreed on N200,000”.

Olasupo stated that the customs officer who is alleged to have taken the money did not hand him a receipt instead he was given his telephone number.

“He took us to his boss, but he was the one I gave the money to. He did not issue any receipt. I gave them the N200,000 because they did not want to release my vehicle and the way they were using their trucks to drag vehicles I could not bear it.

“I want to get my money back from them. The money they collected from me was my monthly allowance I raised from three vehicles that are working for me. That was the money we gathered,”.

Joseph Attah, the spokesman of the Joint Border Security Exercise, as well as the National Public Relations Officer of the Nigeria Customs Service, however, stated that the allegation is false.

Attah said that the driver perhaps had fallen into the hands of fraudsters.

He affirmatively stated that on no account will an officer accept a bribe and also give his telephone number out.

Attah stated, “All the vehicles that were brought to the Customs house are still there. We don’t even know the vehicle you are talking about.

“The vehicles with tomatoes are still there as at (Tuesday) evening and they had a meeting with the farmers and even with the traditional rulers and they have resolved their issues I don’t know which one you are talking about?

“They have resolved the issue, he (the state PRO) has sent to me, even, the few ones that were auctioned with receipts indicating the payment to the Federal account have been forwarded to me.”