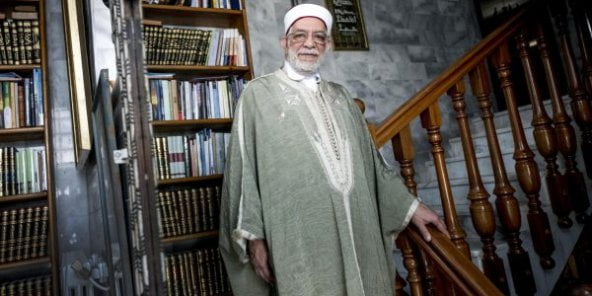 Abdelfattah Mourou at his home in La Marsa, in the northern suburbs of Tunis, on May 8, 2017. © Nicolas Fauqué for JA

After many meetings and procrastination, the Islamist party Ennahdha has appointed his vice-president Abdelfattah Mourou to represent it in the presidential election on 15 September. What are his chances?

At 72 hours from the closing of the candidacy, the nomination of Abdelfattah Mourou was a half-surprise, as we knew the party Islamist referential divided on the choice of his candidate. The majority of the members of the Shura Advisory Council wanted to opt for a figure from their ranks, while the clan close to the president of the movement Rached Ghannouchi showed his support to the head of government, Youssef Chahed.

The approach is a first for the formation out of hiding in favour of the revolution of 2011. Very active since then, at the parliamentary and governmental levels, she has always kept herself from rubbing in the presidential election, preferring to negotiate her support with other candidates. But the movement, which lost nearly a million votes between the vote to designate the Constituent Assembly and the municipal elections of 2018, finally found his “rare bird”, as Rached Ghannouchi called a few weeks ago a hypothetical claimant in Carthage.

Possible capture of the conservative electorate

Founding member of the party and current acting president of the Assembly of People’s Representatives (ARP) –  since the incumbent, Mohamed Ennaceur, was sworn in to temporarily replace the late President Béji Caïd Essebsi as head of state  – Abdelfattah Mourou, 71, is a consensual personality.

With his traditional costumes, this Tunisian lawyer looks like a benevolent patriarch. But this good-natured man of a great culture is at first a formidable speaker rarely running out of arguments. Impulsive, he had tried in 2011 to take a step back from Ennahdha, but his failure to lead an independent list to the Constituent Assembly had made him return to the parent company.

For some observers, his candidacy could save Ennahdha from a stinging setback. The popularity of Mourou and his fluency could reconsolidate the electorate of Ennahdha, but also draw conservative voices in the tank of conservative constitutionalist Kaïs Saïed, the founder of Democratic Movement Mohamed Abbou, or even Hamadi Jebali, former leader of Ennahdha broke with the party and decided to go it alone.

Mourou on the front line

Ennahdha, however, had always claimed to be concerned only by the legislative and not the presidential, as pointed out by the former head of government Ali Larayedh. But to stand behind the opinion of activists who want Ennahdha to try this election will, at least temporarily, hide the divisions of a formation that holds its next congress in autumn 2020.

In doing so, Ennahdha wants to be a strategist. To better prepare for the legislative and evacuate some unfortunate issues, put Mourou on the front line would allow him to cushion, during the campaign, the attacks – launched by other candidates – on the sending of young Tunisians in a conflict zone and the existence of a secret dispensary of Ennahdha.

The party targets the Assembly and Rached Ghannouchi the perch, but, having never obtained an absolute majority in Parliament, she fears, by winning the supreme magistracy, to be called hegemonic and having to assume alone a possible failure on the conduct of the next term.

The blue dove training, champion of the strategy of the alliances, must also evaluate the impact of a victory in the presidential election on its relations with the other parties in the Assembly in case of a relative majority. A double victory would make him assume full responsibility for power; but in case of failure in the first round of the presidential election with an honourable score, she could boast of having tried and support no one in the second round to not interfere with any party – especially as the differences between candidates in Carthage are reduced to 32 days of the vote.