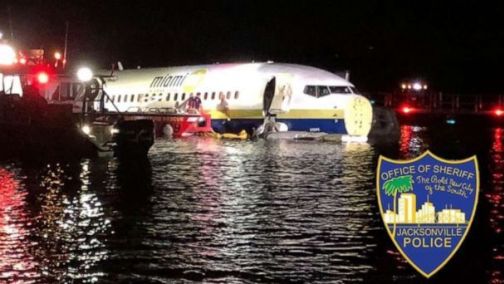 A Boeing 737 plane from Guantanamo Bay, belonging to the United States Department of Defense has crash landed on water.

Naija News understands that the plane crash-landed on the water when it skidded off a runway into the water in Jacksonville, Florida.

The plane was carrying 136 passengers and seven crew members on a flight from Guantanamo Bay typically carry civilian employees, contractors and military families.

Officials say that the incident that occurred late Friday recorded no serious injury.

Jacksonville Fire and Rescue said 21 passengers were transported to the hospital, all in good condition.

“Navy security and emergency response personnel are on the scene and monitoring the situation.”

“all lives have been accounted for,” he said.

Authorities also said teams were working to control jet fuel which had leaked into the water.