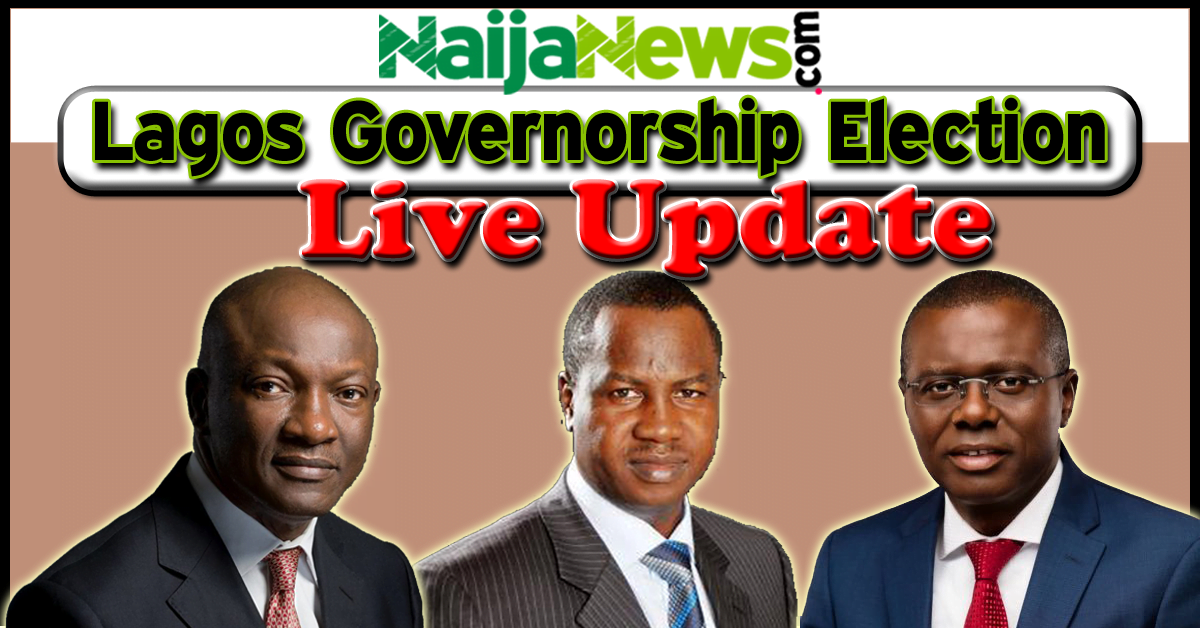 Electorates in Lagos State will today head to the polls to elect their governor and members of the House of Assembly.

The two major contestants for the election are the PDP candidate Jimi Agbaje and APC’ Babajide Sanwo-olu.

Agbaje lost to incumbent governor, Akinwunmi Ambode in 2015 and will be seeking to make this one count in his favour.

Recall that the PDP lost the presidential election on February 23rd to the APC.

Stick to Naija News for live updates as Lagosians vote for the leader and members of the State House of Assembly.

Naija News has gathered that the Deputy Governorship Candidate of the PDP, Haleemat Busari, has lost her polling unit to APC candidate, Babajide Sanwo-Olu.

Busari polled 15 votes against Sanwo-Olu’s 40 at the 021 polling unit of Ward A, Unit 021 in Adekunle Anglican Primary School, Makoko, Lagos a few metres from her residence at Denny Estate.

12: 45 pm: There are reports of tension at Ogudu collation centre for Ward 4 voting centre in the Kosofe area of Lagos State as nine ballot booklets go missing. The Peoples Democratic Party agents were protesting the missing ballot booklets.

12: 05 pm: The candidate of the All Progressives Congress (APC), Babajide Sanwo-Olu voted alongside his wife, Ibijoke, at the Lateef Jankande/Femi Okunnu Polling Unit in Ikoyi.

No INEC official or election materials at Ogudu and Ojota at 1:48pm #LagosDecides2019 pic.twitter.com/pr0fHnCmoR

11:15 am: Polling unit 10 ward 3 Ikorodu Lagos, the PO said the voting has been going on smoothly only that there is a very low turn out of people to vote.

Complete voting materials yet to arrive at the PU. No @PoliceNG personnel present.#SR2019Elections #NigeriaDecides2019 #SRObserves2019

-Voting has commenced and all materials are on ground.#SR2019Elections #NigeriaDecides2019 #SRObserves2019

9: 15 am: INEC has temporarily suspended the commencement of voting at the polling unit of the APC candidate Babajide Sanwo-Olu’s in Ikoyi, Lagos until a malfunctioning card reader is fixed. An INEC official told voters at the ward that a technician was on the way.

9: 05 am: One of the two card readers provided by INEC at the polling unit of the All Progressives Congress (APC) Babajide Sanwo-Olu’s polling unit in Ikoyi, Lagos, has malfunctioned, the Nation reports.