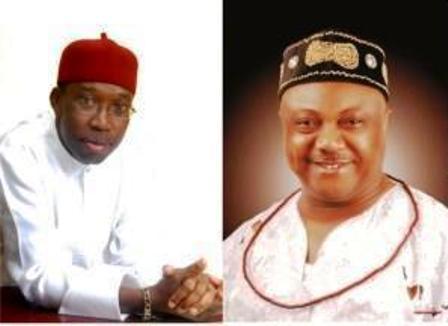 It will be a battle royale in Delta State as the APC’s Great Ogboru goes head to head with incumbent governor Ifeanyi Okowa in the election today.

President Muhammadu Buhari has said that Delta State ought not to be in opposition and assured that the party will win the Guber poll.

During the presidential election on February 23rd, the PDP won in the Niger Delta State but eventually lost to Buhari of the APC.

Stay with Naija News for live updates as Deltans vote for the leader and members of the State House of Assembly.

There was tension in Otorho community, Abraka, Ethiope East council area of Delta, over alleged snatching of ballot papers.

The member representing Ethiope East House of Assembly, Hon Evance Ivwurie, made the allegation in Eroh, another community in the area, after casting his votes in unit 6, ward 2

There was also drama at Iyede Unit 8, Ward 2, Isoko North LGA as both APC and PDP supporters clashed over allegation of manipulation of the voting process. Electoral observers and journalists sighted in the unit were chased away from the ward.

At Iyede ward 2, Unit 3, the polling unit was chaotic as some party agents alleged that PDP thugs chased away APC agents and supporters and other party’s supporters from the unit

-Thugs are beating up @inecnigeria officials (Corpers)
-Election materials are being thrown into the rain.
-The Army just arrived to quell the tension#SR2019Elections #NigeriaDecides2019  #SRObserves2019

The governor expressed confidence that he will win the governorship election after casting his vote on Saturday.

-No security officer present at the PU
-Voting has not commenced because of inadequate number of card readers at the PU.#SR2019Elections #NigeriaDecides2019 #SRObserves2019

It was gathered that the incident took place at a polling unit in the community is which is the hometown of the State Commissioner for Finance, David Edevbie.

A ward Chairman in one of the rival political parties in Oleh Ward 1, Isoko South Local Government Area.

8:10 am: The Officer of INEC in charge of Warri South Local Government Area in Delta State, Grace Okah has said only two wards are yet to get electoral materials.