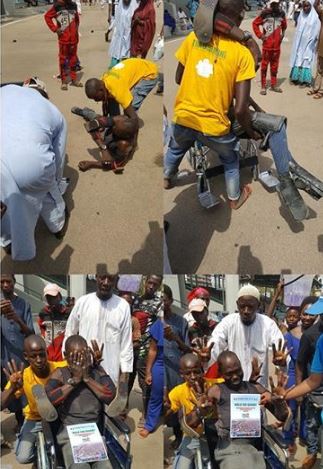 Naija News reports that the wife of the vice president gifted the man who had been seen on the roads of Abuja crawling.

As the crippled man (name withheld) received the chair from Mrs Osinbajo, he burst into tears as passersby and onlookers who also witnessed the moment, moved closer to the crippled man to cheer him up.

The less privileged man thanked Mrs Osinbanjo profusely as he received the chair.

This is coming after Naija news reported that Dolapo Osinbajo had led a delegation of women to solicit support for the re-election of President Muhammadu Buhari and his vice, Yemi Osinbajo.

Dolapo represented the First lady, Aisha Buhari who was absent at the walk.