The famous experiment on casual sex had surprising results

It’s such a famous experiment that it even inspired a sticky 90s song by the British jazz-pop band Touch and Go.

“Want to fuck me?” “was the question that a group of students, both men and women, made to strangers of the opposite sex as part of a survey on the campus of Florida State University, USA, in 1978.

The results were astounding: three out of four men answered “yes” to the proposal. Already among the women, none accepted.

When the question asked was “would you have a date with me?” The results were different: about half of respondents, both men and women, responded positively.

The researchers’ conclusions were overwhelming: the experiment clearly demonstrated the differences in female and male attitudes toward casual sex and confirmed an old gender stereotype.

For Canadian psychologist and writer Steven Pinker, this should not have surprised anyone.

“If you look at social phenomena, you see that men are more likely to be sexually harassing, consuming visual pornography, hiring prostitutes,” he told the BBC.

According to Pinker, the experiment simply “dramatically confirmed a basic biological difference: (…) that a man can potentially reproduce much more rapidly than a woman.”

“When a woman becomes pregnant, she is imprisoned for nine months during pregnancy, while a man can make as many children as the number of partners who are willing to have sex with him.”

In summary, what Pinker and many other experts concluded from the experiment is that because there is a risk of pregnancy, the woman is much more careful in choosing a partner and has no interest in casual sex.

Several subsequent studies that replicated the 1978 experiment reached the same results, indicating that behavior has not changed since then.

Another work in Germany in 2015 focused on a place considered more conducive to an indecent proposal: a nightclub. 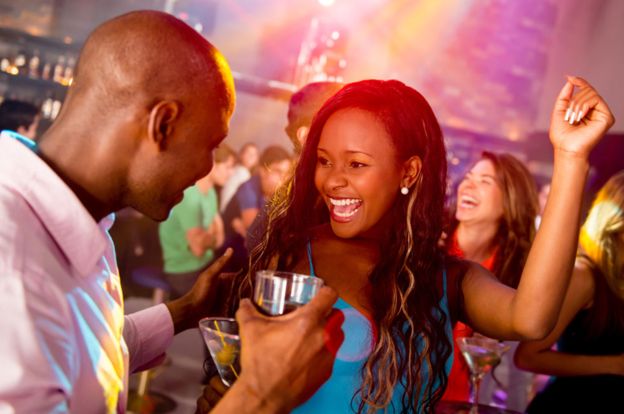 The German experiment of 2015 was done in a disco, but it had the same results

But even there, the results remained the same.

The woman and the sex

These criticisms do not dispute the fact that the vast majority of women would reject a sexual offer from a stranger. But they say that does not mean they do not like casual sex.

For them, the explanation of results is not biological, but cultural.

In the book ” Inferior: How Science Got Women Wrong “, journalist Angela Saini argues that the moral constraints dictating how a woman should behave explain the female refusal to engage in casual sex in the study.

Saini rejects interpretations that focus only on the biological side.

“(It is incorrect) to think that nature and creation, biological and cultural, can be separated, and get to the root of who we really are,” she tells the BBC.

“What we really are are social beings and you can not separate one thing from another.”

Sarah Blaffer Hrdy, author of The Woman That Never Evolved ( ” The woman who never evolved “), agrees that the social side is defining the attitudes of women opposite sex.

She points out that although in recent centuries women have been considered less sexual than men, it has not always been so.

“In some cultures women were feared and they were seen as devils and as overly sexual. The ancient Greeks compared women to bears and lions, suggesting that it was imperative to keep them locked.”

And while the view has changed a lot since the Victorian era, when psychologists believed that women had no sexual desire, it is true that even in the 21st century and the West, women face strong social restraints when it comes to sex.

That’s the position of psychologist Terri Conley, who researched the issue in 2011. “Women are judged harder by having casual sex than men, and it’s something that worries them.”

Conley cites an example of modern life: the so-called walk of shame , an expression used in some English-speaking countries when a woman returns home in the morning wearing the clothes of the previous night after having a chance meeting with someone.

“There are studies showing that women endanger their reputation if they accept a sex offering: it can be considered a ‘whore’ or a desperate sexual. The man does not suffer social damage,” agrees Cordelia Fine, author of Testosterone Rex .

Fine, a professor at the University of Melbourne in Australia, highlights another key element in understanding why all women in studies have rejected having sex with a stranger: fear of violence.

“What the experiments have actually shown is that women are not very keen to risk getting into a situation where they can be murdered, raped or could arouse the interest of a potential harasser,” she told the BBC.

Andreas Baranowski and Heiko Hecht, the German researchers who replicated the experiment at a nightclub, wondered what would happen if women were offered casual sex in a way they had nothing to fear either for their reputation or for their physical integrity .

They devised a second experiment to attenuate the fear factor: they invited a group of male and female volunteers to a laboratory on the pretext of helping a dating company evaluate their compatibility algorithm.

They were presented with ten photos of members of the opposite sex and they were led to believe that the ten had already agreed to meet with them (to have a date or have sex).

The results were remarkable: there were almost no differences between the sexes.

All men and 97% of women agreed to meet with at least one candidate with the potential to have sex.

She used Hollywood stars as potential casual partners instead of strangers.

She asked a group of men whether they would accept a sexual proposal from Angelina Jolie, and a group of women would agree to have sex with Brad Pitt.

These experiments cast doubt on the categorical conclusions that for decades hovered over the famous work of Hatfield and Clark.

And they point out that it may be false that women do not like sex as much as men.