The internal crisis in the Peoples Democratic Party (PDP) in Ekiti
State was finally laid to rest yesterday, with the State Caucus, the
highest decision making organ of the party at the State level
reaffirming former Governor Ayodele Fayose as leader of the party and
declaring the Chief Gboyega Oguntuase-led Exco as the only recognized
Exco of the party in the State.

The Caucus meeting was called consequent upon the controversies over a
meeting held on Saturday, November 3, 2018 in which the Senate
Minority Leader, Biodun Olujimi was pronounced as leader of the party
and call was made for the dissolution of the State Exco.

Interestingly, former Secretary of the party, Dr. TKO Aluko, who was
the arrowhead of the controversial meeting, was at yesterday’s
meeting.

In the communique signed by Prof Olusola, Senator Faseyi, Hon. Kehinde
Agboola, Chief Ademuwagun and Hon. Akinyele, the party declared total
support for the presidential candidacy of Alhaji Atiku Abubakar,
saying that “members and supporters of the party in Ekiti State will
work assiduously to win the 2019 general elections, most especially
the presidential poll.”

The meeting, which laid to rest the status of Dr. TKO Aluko in the
party, declared him as a bonafide member of the party in the State and
also directed that all members of the party that defected to other
parties for one reason or the other and are willing to return to the
party should be embraced and accorded their due recognition.

The meeting set up two committees to look into the party account and
secretariat as well as House of Assembly matters. Hon. Oladimeji was
appointed to chair the committee on party account and secretariat with
Dr. TKO Aluko, Mrs Titi Owoseni and Chief Bola Olu-Ojo as members
while Hon. Dare Omotosho will serve as Secretary.

The committee to look into the House of Assembly matters is chaired by
the Prof. Olusola with Chief Bisi Kolawole as secretary. Other members
are Senator Biodun Olujimi, Chief Dipo Anisulowo, Chief Idowu Odeyemi,
Hon. Michael Ayodele, Senator Duro Faseyi, Hon. Kehinde Agboola and
Hon. (Mrs) Abeni Olayinka. It said the party members in the State
House of Assembly must henceforth consult with the committee chairman
before taking any further decisions.

The State Caucus called on all the party members and supporters to
remain steadfast, noting that the party was sure of victory at the
ongoing Governorship Election Petitions Tribunal. 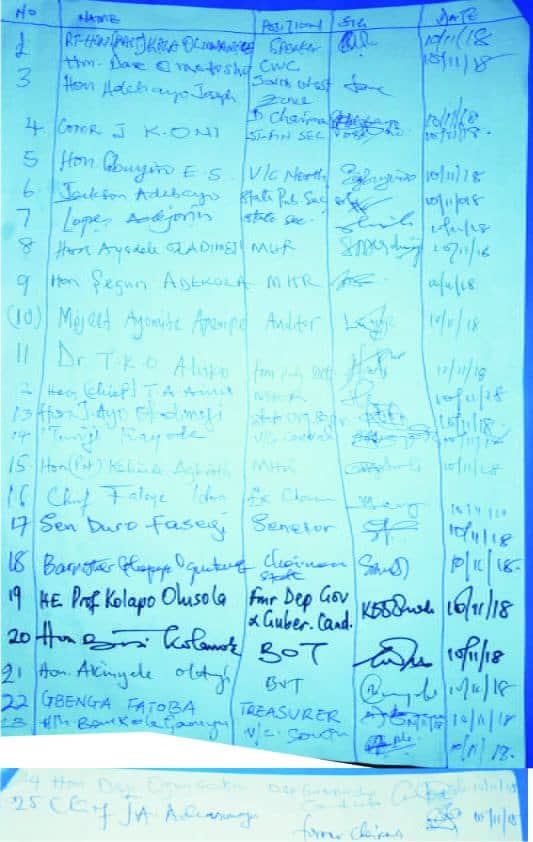