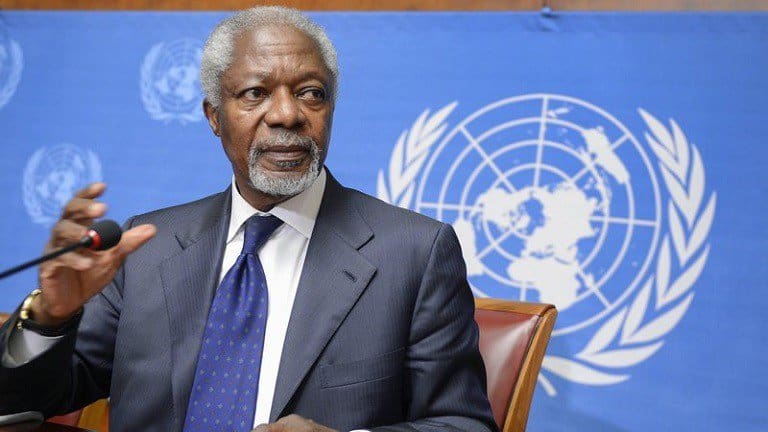 The United Nations is deeply touched by the death of one of it own, Kofi Annan, who dead after a brief illness at age 80, according to a statement published on its official Twitter account on Saturday.

His foundation announced his death on Saturday and the late UN scribe reportedly died in hospital in Bern, Switzerland, in the early hours of Saturday.

Guterres described Annan as “a guiding force for good” and a “proud son of Africa who became a global champion for peace and all humanity.”

“Like so many, I was proud to call Kofi Annan a good friend and mentor.

“I was deeply honoured by his trust in selecting me to serve as UN High Commissioner for Refugees under his leadership.

“He remained someone I could always turn to for counsel and wisdom – and I know I was not alone,” Guterres said in a statement.

Annan, a Ghanaian, was seventh Secretary-General of the United Nations, when he took over in 1996 after the exit of Egyptian diplomat, Boutrous Boutrous-Ghali.

The UN chief said: “He provided people everywhere with a space for dialogue, a place for problem-solving and a path to a better world.

“In these turbulent and trying times, he never stopped working to give life to the values of the United Nations Charter. His legacy will remain a true inspiration for all us.”

He started off at the UN system in 1962 as an administrative and budget officer with the World Health Organisation in Geneva, rising through the ranks to hold senior-level posts in areas such as budget and finance, and peacekeeping.

He served as UN Secretary-General for two consecutive five-year terms, beginning in January 1997.