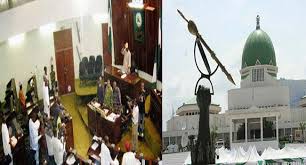 The Speaker of the House, Suraj Adekunbi, read the separate letters of defection by the lawmakers during the plenary session in Abeokuta.

Mr Adekunbi (APC-Yewa North1) said that this was the first time the assembly would be receiving such a high number of defection letters.

He said the assembly received only three such defection letters in the last dispensation.

The News Agency of Nigeria (NAN) reports that two of the lawmakers, Akintayo Folakemi (Yewa South) and Ojo Viwanu (Ipokia/Idiroko) defected from the Peoples Democratic Party (PDP) to the All Progressives Congress (APC).

Harrison Adeyemi (Ogun Waterside), however, defected from the APC to the PDP.

One of the defectors to the APC, Ms Folakemi who spoke To NAN commended the ideology of her new party as well as Governor Ibikunle Amosun for ensuring rapid development in the state.

She said the major reason for her defection was for her to be part of the Ogun West for Governor campaign.

“ I am an Ogun West person and whatever will make my people happy is what I will go for.

“Whatever is done that concerns Ogun West, I must be part of it,” she said.

She stated that it was high time somebody from the zone became the governor of the state, adding that this had eluded the zone since the creation of the state 42 years ago.

Folakemi promised to continue to do her best in ensuring that the dividends of democracy got to the nook and crannies of her constituency.

While some of the PDP lawmakers, who defected, gave reasons for their decision as the crisis and division within the party at the state level.