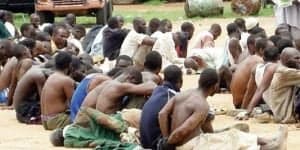 113 Boko Haram terrorists  have been convicted and sentenced to jail for their involvement in acts of terrorism, killings across the country.

The convicts, who were sentenced to various jail terms, were arraigned before the the special court for the trial of terrorism-related cases has convicted and sentenced at the Wawa Military Cantonment in Kainji, Niger State, by the Federal Government.

They were charged for various offences, ranging from membership of the proscribed Boko Haram group, concealing information vital to security agencies, providing support to the sect and participating in acts of terrorism, which resulted in the death of many persons.

One of the convicted persons, Kabiru Mohammed, from Kaban-Magadan, Funtua, Katsina State was accused of receiving training in the use of explosives and other terror items.

He was also accused of participating in a series of attacks in Bama, Konduga, and Baga in Borno State, and Damaturu in Yobe State, which led to deaths in the two states.

According to Mohammed, he joined the sect in 2013 and rose to become a leader. He was said to have led others in carrying out attacks as well as instructing them to carry out attacks on people and communities.

Mohammed, who disclosed that he voluntarily joined Boko Haram, said, at a time, he became tired of the kind of life he was leading and threw away his gun and escaped to Katsina, his home state.

He was arrested in 2015 at a motor park in Katsina. He pleaded guilty to all the seven counts brought against him and was consequently sentenced to 30 years imprisonment with hard labour on each of the counts, which are to run concurrently from the day of his arrest.

Also sentenced was Adamu Mohammed, 22, from Gombe State, who was charged with the murder of six people as well as throwing a bomb into a marketplace. While he admitted to killing six persons with a shotgun, he, however, claimed he threw the bomb in a river and not in a marketplace.

He was sentenced to 25 years with hard labour in a maximum prison without an option of fine.

Banzana Yusuf, from Kano State, on his part, bagged 20 years for his role in the planning and kidnapping of the Chibok schoolgirls in 2014.

Similarly, Shetima Modu, 25, was arraigned on a four-count charge of engaging in terrorism activities.

Sabo Kyari Mohammed, who was described by the Department of State Service (DSS) as a “strong member of Boko Haram,” bagged a jail term of five calendar years. Part of the charge against him included providing surveillance for the group and participating in the attack known as “operation point and kill” in his village, Misau, in Borno State. He was arrested by men of the Nigerian Army in Jos, Plateau State, along with his wife and two children.

In handing down the sentence, the judge stated that though the defendant, being a first-time offender, the court ordinarily ought to have showed him mercy in the judgement, but, “due to the carnage and wanton destruction of lives their action caused society, he is to serve a five full calendar years imprisonment. This is to serve as a deterrent to himself and others like him,” the judge held.

Also sentenced is Zainab Idris, wife of Boko Haram commander, Babawo Idris. Zainab was arrested in 2014 with her two children, while on her way to join her husband in Sambisa forest.