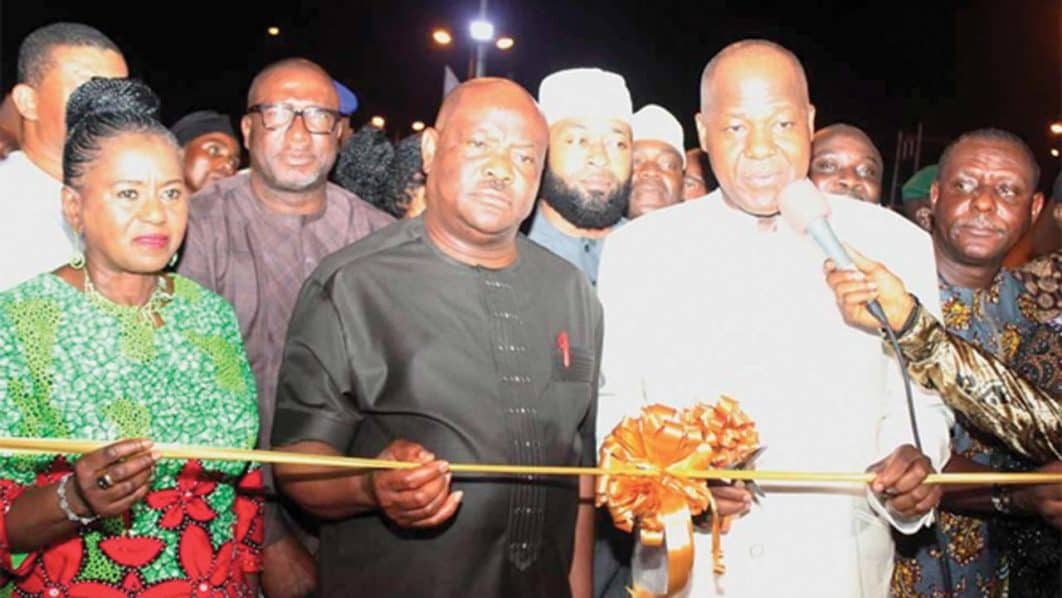 Speaker of the House of Representatives, Mr Yakubu Dogara, has praised the Rivers State Governor, Nyesom Wike, for his efforts in ensuring an all-round development in the state.He described Governor Wike as a “consummation of excellence” following his delivery of various projects in the state.

The Speaker said this on Friday while commissioning the Woji-Elelenwo Dual Carriageway and Bridge, a major interchange between three local government areas of Obio/Akpor, Port Harcourt and Eleme.

“This governor is a consummation of excellence. He is a representative of a refiner’s fire and a fuller’s soap. A refiner’s fire separates impurities from the gold and leaves the gold intact. “Refiner’s fire brings out the best. A fuller’s soup removes dirt and leaves the cloth sparkling clean. I am exceedingly proud of what Governor Wike has done,” Dogara said, while congratulating the people of Rivers State for having a Governor like him.

The speaker further said that though he belongs to the ruling (All Progressives Congress (APC), as a parliamentarian, the entire country is his constituency. He noted that only tribalists are restricted to their tribes and political parties because they don’t value performance.

“I wonder why someone will look at this project and say nothing exists. If that is the case, the person is a tribalist. As citizens, we celebrate excellence and we must celebrate Governor Wike,” he said.

Dogara also noted that in view of the developmental nature of the major projects outlined by Governor Wike, President Muhammadu Buhari would honour the invitation of Rivers State Government to perform the commissioning.

In his remarks, Governor Wike stated that Nigeria needs democracy dividends and not party politics.

He said he had invited the Speaker of the House of Representatives to commission the road because pro-people projects transcend inter-party rivalry. The governor, however, maintained that there is an attempt to distract the Rivers State Government.

He alleged that while the Federal Government has once again arranged the refund of state funds used for federal projects, Rivers State has been excluded. Speaking further, he, however, noted that the state will not commission some projects until the President was available to commission them.

Some of the projects he mentioned include the Mother and Child Hospital, Sakpenwa-Bori Road and Ogoni-Andoni-Opobo-Nkoro Unity Road.

On the road, Governor Wike said that though the road was awarded in 2009, the previous administration failed to fund it, resulting in its abandonment in 2012.

“This project is very useful. That is why we chose to complete it. There was no road here at the time we came. We completed the road and the bridge. We have paid the contractor up to 95 per cent.“This road is an alternative route to Trans-Amadi-Slaughter Road. Ordinarily, we would have tolled it, but due to our love for the people, we will not toll it”, Governor Wike said.