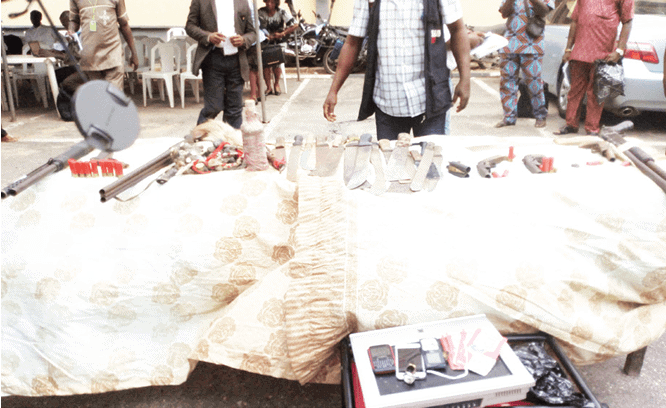 Sack Of Guns Retrieved By The Lagos Police Command

Sack of guns and ammunition have been retrieved in a secondary school in Mushin, Lagos State.

This comes after the Commissioner of Lagos State Police Command Mr. Imohimi Edgal, recently decried the increasing number of youths’ involvement in cultism.

According to the commissioner, the sack was found in Eko Boys High School. Edgal disclosed that the Divisional Police Officer (DPO) in charge of Alakara Police Station stormed the school after receiving tip-off through community partnership.

The commissioner said that immediately after the DPO received the information, he first selected a team of crack detectives and went to the school, where the weapons were recovered.

He said: “To the surprise of the DPO and his team, when the sack was opened one Magnum double- barrelled pump rifle, double-barrelled pump action gun, one Barretta pistol, 9mm live ammunition and 10 live cartridges.