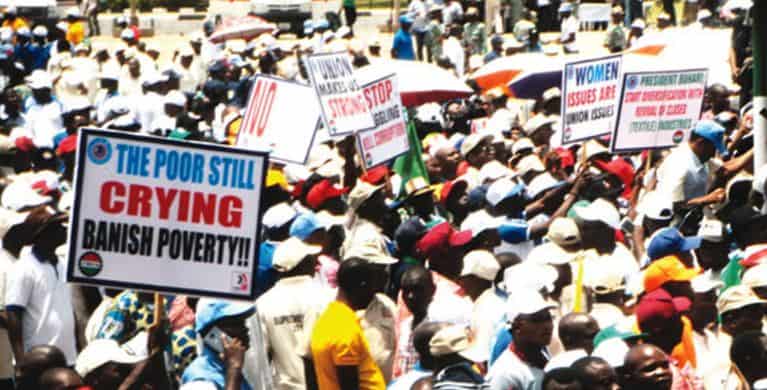 The Federal government has assured workers of fast tracking the presentation of the new minimum wage bill at the National Assembly as soon as they committee working on its submits its recommendation.

“It is my hope that the Tripartite Committee comprising government, labour, and the private sector, will expedite its assignment to enable the Federal Government to present an Executive Bill on a new National Minimum Wage to the National Assembly for passage into law, as soon as possible.”

Osinbajo explained that the government would stick to the Constitution in the negotiation for the new wage.

Under the Constitution, only the Federal Government can negotiate wages with workers because the issue is on the executive list. Governors have been appealing  that they be allowed to negotiate with workers what to pay them.

Osinbajo said since the issue is on the exclusive list, it is the federal government’s responsibility to establish necessary social protection floor for workers.

He said: “The argument for a national minimum wage, therefore, cannot be faulted because minimum wage is the minimum amount of compensation an employee must receive for putting in his or her labour and as such should be anchored on the principles of social justice, equity, and fairness. We believe that those who can pay above the social protection floor are free to do so, as many have been doing in many states and sectors of the economy.”

“This administration has no intention of presiding over the dismantling of the gains organised labour secured for its members almost four decades ago.

“This administration has remained committed to improving the welfare of the Nigerian people. When we came into office at least 22 states were owing salaries, some for a whole year. If you recall in November 2015, the President said and I quote, ‘all my life I have always earned a salary, so I understand what it means when your salary is not paid or when it is not enough’.

Quoting Mr president in a visit of some of the governors last year, The Vice President said ‘I don’t know how any of you can go to sleep at night knowing that your workers have not been paid’. The President’s concern for workers is not a theoretical or rhetorical one , but one borne out of experience and respect for the sweat of the working classes.”

“This is why we evolved mechanisms to bail out all the 36 states of the federation, to the tune of N1.91 trillion, in recognition of the shortfalls in their finances arising from the oil shocks of 2015/2016.”

“We have extended this support regardless of party affiliation, to enable them settle the backlog of arrears of salaries and pensions of workers”, he said.

“At the inauguration of the National Economic Council in 2015, President Buhari publicly declared that our administration will extend support to every state, because poverty is no respecter of ethnic group, religion or party affiliation.

“While we do recognise that payment of salaries and pensions is essential; we are also conscious of the fact that the increasing cost of living and the recognition to ensure a fair and decent living wage has rendered the minimum wage Instrument obsolete. Accordingly, President Buhari inaugurated, on November 27, 2017, a Tripartite National Minimum Wage Committee to renegotiate the National Minimum Wage for our workers”.

Labour, Osinbajo noted that Minimum wage has always been in the forefront of the push for a better Nigeria, starting from the struggles for independence; right through to the clamour for the restoration of the democratic order, and, in the last 19 years, for the sustenance of the freedoms guaranteed by our democracy.

NLC President, Ayuba Wabba urged the government to improve on security intelligence across the nation.

According to him, the crisis of widening unemployment has been further aggravated by indiscriminate sack and retrenchment of workers by some public and private employers.

“Unfortunately, the different levels of government that should be more concerned about protecting our people are the ones leading the campaign to push more Nigerians into the unemployment market.

“That is why unemployment has remained high with an alarming proportion of our youth jobless.

“The few that have a semblance of employment operate under very precarious conditions denoted by job insecurity, poor work conditions and gender discrimination.

“The trend of factory closures has continued to spiral out of control turning our once lively centres of economic productivity into worship and entertainment centres”, he said.

The NLC president said the increasing rate of unemployment has led to escalating poverty, as more than 70 per cent of the population, he said, lived below the poverty line.

“In fact, a number of international economic reports forecast that despite the significant difference in our population size, Nigeria may soon overtake India as the poverty capital of the world.

“The reasons for endemic poverty in Nigeria are not far-fetched. Our economic structure does not provide the enabling space for mass industrialisation imbued with the capacity for sustainable jobs.

“Our public policies and consumption pattern still encourage the export of jobs and the import of poverty,” he added.