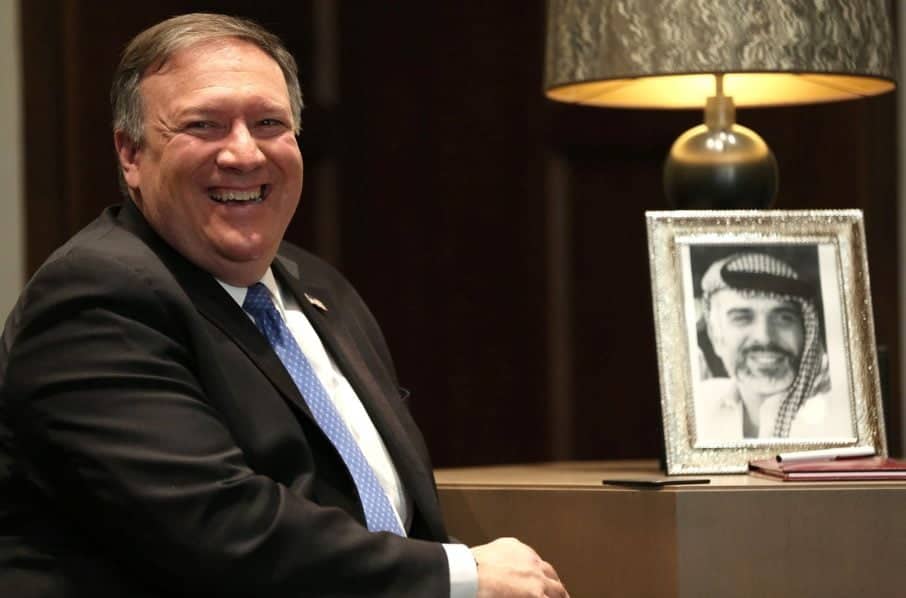 Pompeo says US ‘fully supports Israel’s right to defend itself’

Pompeo Says US Fully Supports Israel’s Right To Defend Itself

US Secretary of State Mike Pompeo has ended his  three-days Middle East trip yesterday without having met any Palestinian but nevertheless urged their leadership to rejoin the peace process.

Naija News learnt that  Pompeo refused to criticise Israel for the killing of dozens of unarmed Palestinian protesters during weeks of rallies on the Israel-Gaza border as he concluded his diplomatic tour in the Middle East.

After stops in Saudi Arabia and Israel, Pompeo headed to Jordan’s capital, Amman, where he held talks with Ayman Safadi, Jordan’s minister of foreign affairs, on Monday.

At a press conference after the meeting, Pompeo was asked if the US took a position on the recent protests at the Gaza-Israel border, in which nearly 50 Palestinians were killed by Israeli fire.

“We believe the Israelis have the right to defend themselves, and we’re fully supportive of that,” Pompeo, who was confirmed as the top US diplomat last week, replied.

While relations between Israel and the US are at their closest in decades, the Palestinian leadership has boycotted the White House since President Donald Trump recognised Jerusalem as the capital of Israel in December.

Palestinian leaders see East Jerusalem, which was captured by Israel’s military in 1967 and has been occupied since, as the capital of their future state.

The occupied West Bank and besieged Gaza Strip, along with the more than 20 percent of Israel’s population made up of Palestinians who remained after the establishment of the state of Israel in 1948, have been protesting against Trump’s policies for months.

For his part, Safadi pointed to the lack of progress towards a two-state solution as one of the major destabilising factors in the Middle East.

Pompeo said Washington understands any solution will be settled by Israel and Palestine, but is working to push the parties to the negotiating table.

“We’re certainly open to a two-party solution as a likely outcome. We certainly believe that the Israelis and the Palestinians need to have political engagement,” added Pompeo, who did not meet any Palestinian during his three-day trip to the region.

“We urge the Palestinians to return to that political dialogue.”

At the press conference, Pompeo also reiterated his concern about Iranian influence in the region – a topic he covered during earlier meetings with officials in Israel and Saudi Arabia.He said he wanted to “de-escalate” the conflict through Geneva, referencing UN-brokered talks between the Syrian government and opposition groups.

Safadi agreed with Pompeo and stated that Jordan, which shares a border with Syria, is housing roughly three million refugees from the conflict.