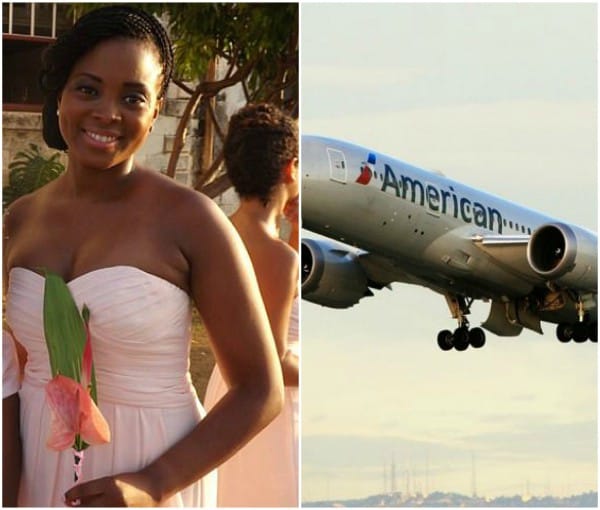 A Nigerian lady has slammed a lawsuit against American Airlines after she alleged that the airline’s flight attendant deliberately destroyed her wedding dress in August 2015.

The court papers claimed Yewande Oteh of Cherry Hill, New Jersey, decided to sue the airline after it failed to prevent or investigate the incident.

Oteh was flying from Philadelphia International Airport to her destination wedding in Montego Bay, Jamaica, when the incident took place.

The lawsuit claims that flight attendant Melanie Masters put something into the overhead bin where her dress was stored just after an argument between the two.

The lawsuit alleged that Masters conspired with co-workers to stain her gown with red wine. Oteh and her family are suing American Airlines for more than $300,000, alleging that the airline over the “willful and wanton” actions on its part.

READ ALSO  COVID-19: No One Has Died At Our Isolation Centre - Oyo Task Force

Court documents, obtained by the Courier-Post, reveals Oteh’s complaint that describes her ordeal began when authorities asked her to remove her gown from a checked bag at the Philadelphia airport.

She said a ticketing agent told her that there would be room to hand the dress in the aircraft’s closet. However, after she boarded the flight Masters did not allow her to store her dress in the closet, saying that it was not for passengers to keep their items.

Masters “became indignant and agitated, and began to talk to the plaintiff in a hostile aggressive way, instructing her that the closet space was not for passengers,” the lawsuit claims.

Oteh was later told to store the dress in an overhead bin. Oteh, who was traveling with her then-would-be-husband and their 9-month-old son, saw the flight attendant reopen the bin while conversing with two of her co-workers.

“It was [Oteh’s] belief that the flight attendants were placing something in the bin and making fun of [Oteh] and her wedding gown,” reads the lawsuit, according to the Courier-Post.

When Oteh arrived in Jamaica she found that her dress was covered with wine stains. The incident made Oteh “emotionally distraught” and forced her to cancel planned events with her guests, the lawsuit claimed.

Oteh’s mother, Yvette Sterling reportedly said: “American Airlines and its personnel robbed us all of this once-in-a-lifetime experience.”

In a statement to International Business Times, American Airlines confirmed about “reviewing the lawsuit,” but no other detail was given out.

Over the last few months, American Airlines found itself in hot water with several passenger complaints. Earlier this month, actress Lana Dunham slammed American Airlines flight attendants for “having a transphobic talk.” In another incident that took place in July, a woman claimed that she was forced by a flight attendant to sit next to a man who masturbated while she slept during a flight to Paris.