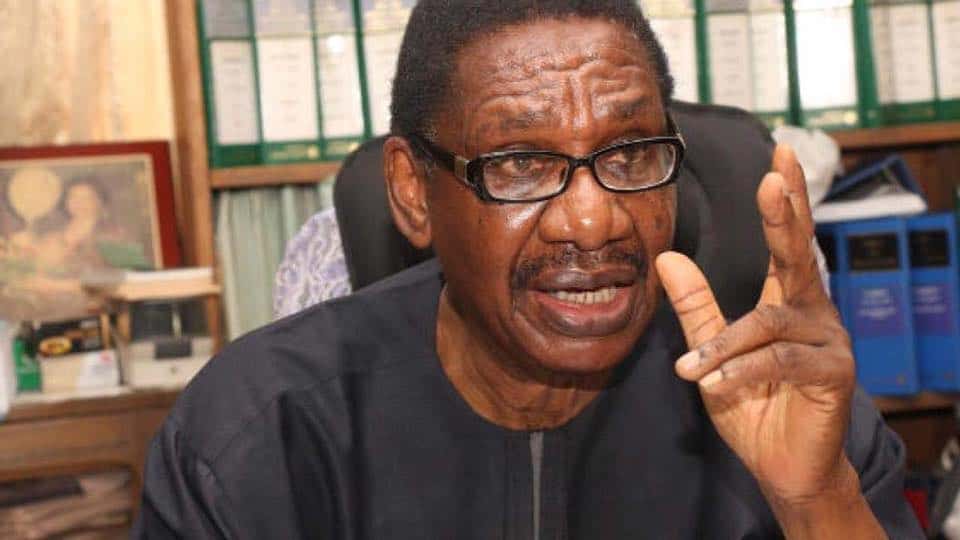 The Chairman of the Presidential Advisory Committee on Anti-Corruption, PACAC, Itse Sagay, has expressed shock at the acquittal of the Senate President, Bukola Saraki, by the Code of Conduct Tribunal.

Mr. Sagay, septuagenarian professor of Law and Senior Advocate of Nigeria, said it was incredible Mr. Saraki got absolved and, therefore, advised the federal government to appeal the ruling.

The CCT on Wednesday cleared Mr. Saraki of false asset declaration, charges brought against him by the federal government. The tribunal chairman, Danladi Umar, ruled that the prosecution failed to establish prima facie case against Mr. Saraki, thereby upholding a no-case submission made by the defendant’s counsel, Kanu Agabi.

“I was shocked myself by the ruling,” Mr. Sagay told PREMIUM TIMES Wednesday evening. “The amount of evidence amassed against him (Mr. Saraki) was considerable; so, I am surprised it was said no prima facie had been made against him. It’s shocking that’s all I can say.”

The federal government arraigned Mr. Saraki before the CCT in September 2015, shortly after he defied his party, All Progressives Congress, to contest and win the National Assembly leadership.

As if he was sure he would lose at the CCT, he had exhausted all avenues, up to the Supreme Court, to avoid the trial, which, however, resulted in his favour on Wednesday.

“From the simple analysis of the evidence of the prosecution, we find it difficult to accept the seriousness of the witnesses. All the evidences were so discredited, unreliable that no reasonable court will attach probate value to them.

“Since the essential ingredients of all the charges were not proved as required by law, this tribunal has no option to discharge and acquit the defendant in view of the manifestly unreliable evidence of the prosecution witnesses,” said Mr. Umar, whom Mr. Saraki had several times accused of bias.
However, Mr. Sagay disagreed with Mr. Umar.

“”If you look at this case, the prosecution was very organised. Evidence was brought out very clearly. In fact, I would say mountains of evidence. So, nobody can blame poor prosecution in this case. So, what is the problem? A Nigerian factor? We don’t know,” said. Mr. Sagay.

In the wake of the ruling, many Nigerians criticised the CCT and expressed sentiments Mr. Saraki’s acquittal made mess of the much vaunted Buhari anti-corruption war.

The Kaduna State Governor, Nasir El-Rufai, had, in a leaked letter to President Muhammadu Buhari, said the outcome of the Saraki trial was key to the assessment of the administration’s anti-graft war.

“It is a thing that will be under a very serious review to assess the whole anti-corruption fight; to see who is for it; who is subverting it.”

He dismissed views Mr. Saraki’s trial was politically motivated in the first place, saying “a crime is a crime”.

Asked to advise the government on what next to do, Mr. Sagay said: “obviously it (Saraki’s acquittal) has to be appealed against for the sake of the judicial system. The whole thing sounds incredible.”

N-power portal: Application Is Out, Here is How To Register