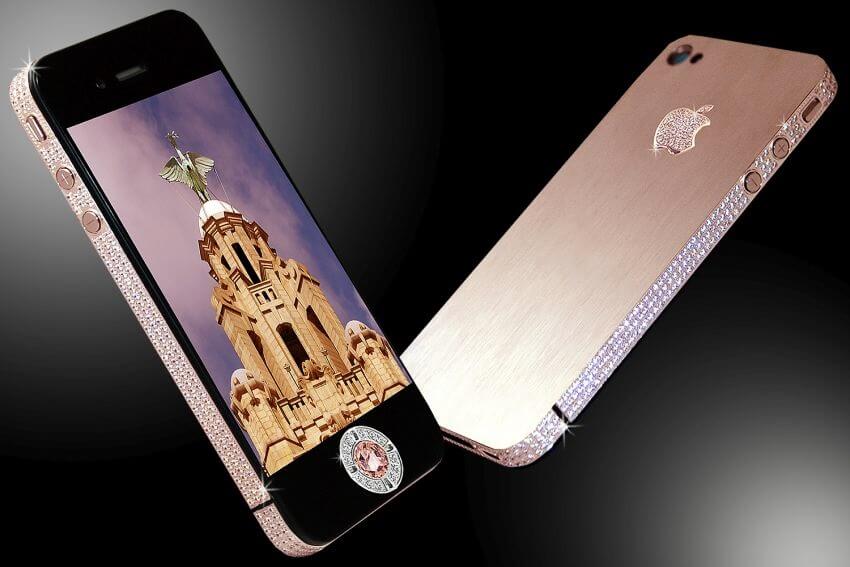 Most expensive phones have joined the list of elite possession and since the invention of phones, it has gone from household necessity to a pricey object to treasure.

These luxury phones are encrypted with precious stones and precious metals such as diamonds, gold, silver and platinum. Whether for vanity sake or just a flex of share wealth, here are the five most expensive phones ever made starting with the most expensive – Diamond Rose iPhone 4, Supreme Goldstriker iPhone 3G, GoldVish Le Million, iPhone 3G King’s Button.

Designed by Stuart Hughes, the Diamond Rose iPhone 4 32GB top the list as the most expensive phone in the world. The price is unbelievably worth $8 million but perhaps the 500 individual flawless diamonds encrypted by the side and additional 53 diamonds on the apple logo makes it worth the indulgence.

As the second most expensive phone in the world, the Supreme Goldstriker iPhone 3G is priced at $ 3.2 million and a variant of the iPhone from Apple. It features a casing made out of 271g of solid 22k gold and a screen trimmed with fifty-three 1-carat diamonds. A 7.1 carat diamond dotted the home button.

On delivery, the Supreme packaged in a granite carved chest designed with Kashmir gold plus an interior lining made with nubuck top-grain leather.

READ ALSO: 6 Reasons Why Apple Devices Are The Best Device

The GoldVish won the Guinness World’s Records at the Millionaire Fair in Cannes, France in September 2006 as the most expensive phone ever made and sold to a Russian businessman for £1 million. But the subsequent emergence of more lavishing tech advanced mobile phones demoted the GoldVish to number 4 on the list of world’s most expensive phones.

It was handcrafted by famous Swedish designer Emmanuel Gueit who encrypted the precious plated mobile with 120-carat VVS-1 grade diamonds and only available on special request.

The Diamond Crypto Smartphone was also designed by Austrian jeweller Peter Aloisson and developed by Russian firm JSC Ancort. With its $1.3 million price tag and 50 diamonds (10 of which are blue), it was the most expensive phone in the world back 2006.

4 Simple Ways to Protect your Smartphone.

6 Reasons Why Apple Devices Are The Best Device