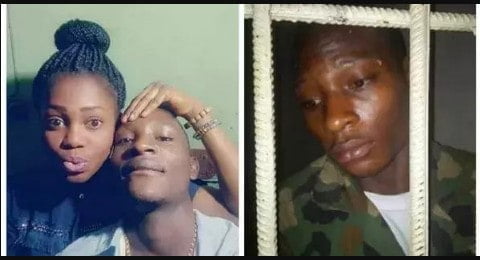 The authorities of the Nigeria Airforce has indicated that Lt. BA Kalu, the officer who murdered his colleague and lover, Oladipupo Solape in cold blood, is currently undergoing psychiatric tests to ascertain his mental ability.

Punch reports that Lt. Kalu, an Aircraftman, would be dismissed from the service after facing a disciplinary panel and handed over to the police to be prosecuted for the murder as a civilian.

The Director of Public Relations and Information of the Nigeria Airforce (NAF), Group Captain Ayodele Famuyiwa, who confirmed the psychiatric test being carried on Lt. Kalu, said the air force would also ascertain whether the suspect acted under the influence of drugs.

Group Captain Famuyiwa added that the family of the deceased airforce woman had been contacted and condoled with.

“If somebody wrote down a note and also committed himself to such act, we have to be sure if he is mentally stable or not.

Therefore, there is a psychiatrist that is attached to him for a test. I also understand that some of his blood samples were taken to ascertain whether he had used drugs.

Kalu will remain in the service until a disciplinary panel set up on the matter comes up with its decision. We know there are several offenses against the state, including this one, which is murder.

But the air force has set up its own disciplinary procedure. A board is investigating and will decide the punishments for the suspect. The girl’s parents have been contacted and the NAF has commiserated with the family.”

A source at the NAF Tactical Air Command, Makurdi, Benue State, where the incident occurred, said that Lt. Kalu had already confessed to the crime.

“Kalu killed his girlfriend and he has admitted it. What the panel is investigating is to unravel the circumstances that led to the incident.

The whole essence of that investigation is to prevent a recurrence, not to exonerate someone who has already admitted guilt.”

Recall that Lt. Kalu killed Oladipupo, aka Shomzy, a native of Badagry, Lagos State, whom he had been having a romantic affair which lasted for months, following allegations that she was cheating on him with different men including superior officers.

He allegedly shot her to dead in the early hours of Saturday, March 11, 2017, at the air force base after they spent the night together.