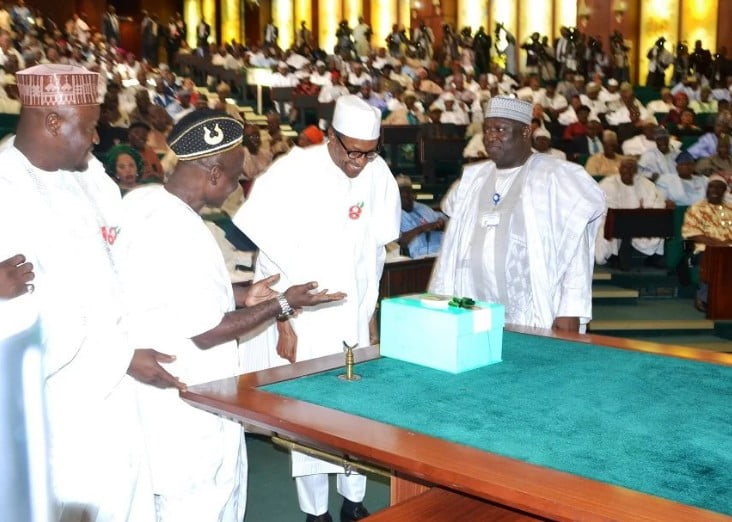 President Muhammadu Buhari has presented the 2017 appropriation bill to the National Assembly.

The budget is a N7.298 trillion proposal and will become effective immediately the Assembly approves and passes it back to the president for assent.

The N7.298tn proposed in the budget is a 20.4% increase over the 2016 estimate and the president’s breakdown reveals why.

Some ministries witnessed increases in their budgetary allowances for improved service delivery.

President Buhari taking a bow after presenting the 2017 budget

The judiciary saw an increase in its funding ‘to help it to perform even better’, according to President Buhari, while ministries like power, works and housing also got increases.

President Buhari taking a bow after presenting the 2017 budget

President Buhari noted that the need for increase in the funding of the power sector goes without saying. He noted that the ministry oversaw a critical sector in the government’s drive to help the country recover from the economic recession.

The president also announced announced that the 2017 budget would also use a zero budgeting method like the 2016 budget in order to ensure transparency.

The president also assured Nigerians that the country would regain its economic strength on the basis of the provisions he has made in the 2017 budget.

Also, the president made provisions for more payments to ex-militants because according to him ‘we all must be committed to ensuring there is peace in the Niger Delta’.