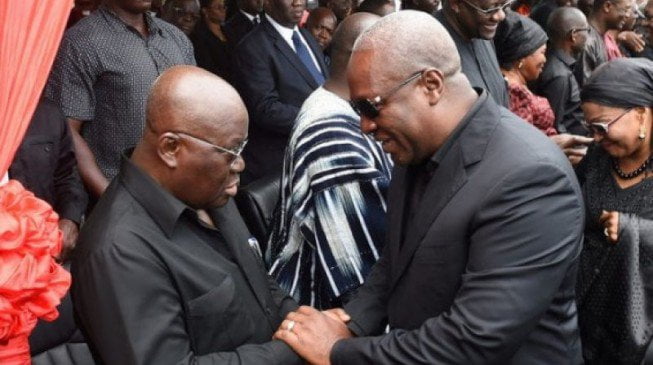 Ghanaian incumbent president, John Mahama, has been defeated by Nana Akufo-Addo in the Ghanaian presidential elections, according to media reports in the country.

According to Joy News, one of the leading television stations in Ghana, Akufo-Addo maintains a lead of nearly one million votes, over Mahama, who has led the country for four years.

Of 275 constituencies in the country, results have been collated from 251, and Akufo-Addo is leading with 5.268 million votes, while Mahama polled 4.367 million votes.

“The John Mahama I know is somebody I believe is capable of rising to the occasion,” Akufo-Addo said, projecting that Mahama will concede the elections.

Mahama on the otherhand has called on his supporters to respect the constitution and keep at peace till the results are in, adding that he would take the outcome of the polls in good fate.

“Let us respect the Constitution. The EC is doing its work. Don’t let your spirit be down at all, we are a great party,” Mahama said.

Kwesi Nduom, a presidential aspirant, who conceded to Akufo-Addo, said the electoral commission must not hold the nation to ransom, but must let the results out as soon as possible.

The official results are expected to come in before Friday midnight.