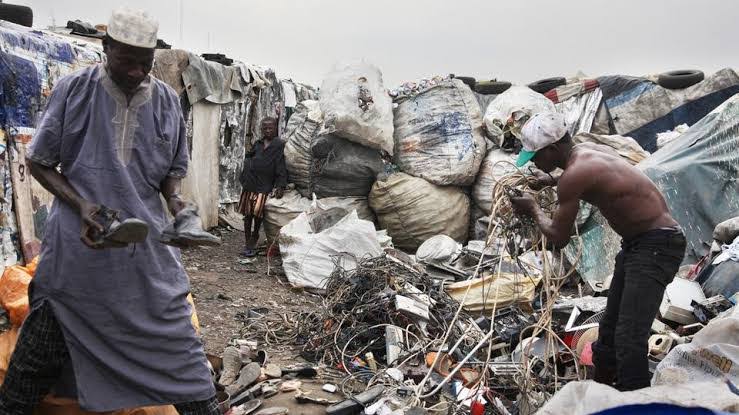 The Defence Intelligence Agency (DIA) has called on Nigerians to monitor scavengers, better known as mai bola, because some of the items they collect are used for local manufacture of improvised explosive devices (IEDs).

Commodore Friday Okolie disclosed this on Monday when he represented the agency at a public hearing organised by the house of representatives committee on national security and intelligence, on the consideration of four security bills.

Presenting the contribution of the agency to the bill seeking to establish a national commission against the proliferation of small arms and light weapons, the agency raised concern over the activities of scavengers, saying they need to be monitored.

According to him, “the elements used locally to manufacture improvised explosive devices (IEDs) consist of various components such as initiator, switch, main charge, power surge and container.

“It may be further enclosed with additional enhancement such as nails, glasses or metal fragments designed to increase the amount of shrapnel propelled by the explosion.

“These items are most often collected by scavengers who move around from one location to another in residential and business premises, sourcing and collecting discarded items, such as scrap metals, plastic, beverage cans, metals, among others, from refuse dumps and bins.

“Their activities are mostly not scrutinised by any authority. The agency considers that the bill gives more power to law enforcement agencies to monitor the activities of scavengers’ movement and the use of scrap metals and other materials they may collect and sell to be used for the manufacturing of IEDs.”

Okolie further disclosed that blacksmiths can produce assorted and sophisticated weapons, including rifles, revolvers and IEDs.

He recommended that the activities of blacksmiths should be regulated, adding that the defence industry could also harness their talents.

His words, “The cautionary attachment to blacksmith skills, as well as the traditional weapons manufactured for hunting, ceremonial and ornamental purposes, has remained the symbol of power and prestige in some traditional communities in Nigeria.

“However, in recent times, blacksmiths have advanced their skills and now possess the capability to manufacture assorted and sophisticated rifles such as AK-47, revolvers, pistols, improvised explosive devices (IEDs), among others.

“This development has created the need to identify, monitor and regulate their activities; thus, the need to talent-hunt for blacksmiths that could be integrated into the defence industrial cooperation (DICON) to enable all defence industry complex exploit their talents.”

Okolie added that the high demand and use of fertilizers to produce IEDs have led to the “establishment of illegal fertilizer companies, especially in the northern part of the country”.

“Surprisingly, fertilizers are being sold to unscrupulous persons who use the chemical substance locally as explosive materials to manufacture IEDs capable of destroying, incapacitation and massive loss of lives.

“These underscores the bill to cover all activities of companies and other business enterprises buying and selling fertilizer, hydrogen peroxide and other components that can be used as explosive materials in IEDs.

“The bill would need to further consider the combination and quantity of these materials to be sold, restricted, regulated and monitored,” he said.