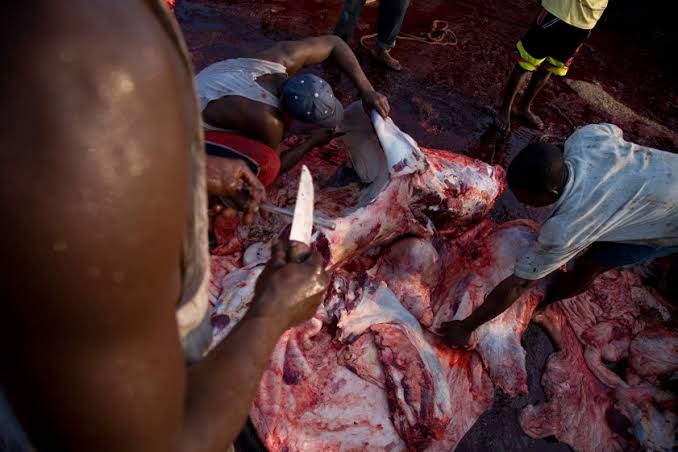 The Kwara State Command of the Nigeria Security and Civil Defence Corps, NSCDC, has arrested two men over an alleged attempt to sell poisonous cow meats to unsuspecting customers.

Naija News understands that the alleged meats were confirmed to be unhealthy for human consumption after a test was carried out on them by the State Ministry of Environment and Public Health.

Speaking earlier in Ilorin the state capital, NSCDC spokesman in the state, Babawale Zaid Afolabi, said the suspects, Bashiru Bala Zuru, a meat seller and his accomplice, Nawali Bala, were nabbed in Patigi, Patigi Local Government Area of the state.

He disclosed further that Bala had confessed during interrogation that the cow meat was given to him by one Dantani Jayewu.

Meanwhile, at the time, Bala who reportedly lives in Okoloke, Kogi state, is nowhere to be found.

Afolabi assured that the suspects would be charged to court after completion of investigations.

In another news, two officers of the Nigeria Police Force have been brutally injured by suspected kidnappers who were trying to flee arrest.

The Bayelsa State Police Command confirmed in a statement made available to newsmen during the weekend, that the suspects stabbed two cops and a vigilante.

Naija News reports that the incident happened in the Adagbabiri community in the Sagbama Local Government Area of the state last Friday.

The criminals were reportedly nabbed by the security men while attempting to abduct their target in the area.

While trying to resist arrest, they stabbed the officers, police spokesman in the state, Mr Asinim Butswat, confirmed.