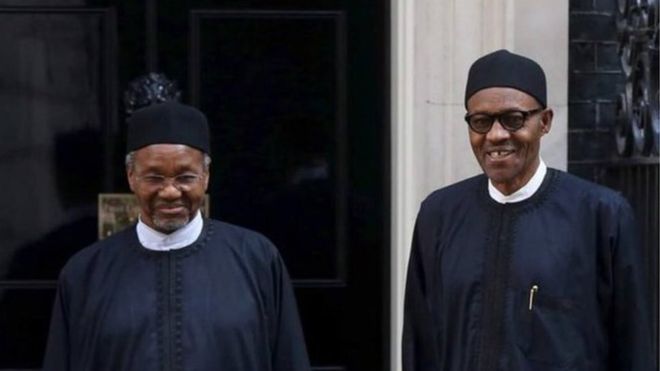 It was gathered that OMLs 123, 124, 126 and 137 – all operated by Addax Petroleum Development Nigeria Limited – have been taken away and awarded to Kaztec Engineering Limited/Salvic Petroleum Resources Limited.

The consortium, (KEL/Salvic), is owned by oil magnate, Emeka Offor, who is a close ally of Sylva, Daura and the Director of the Department of Petroleum Resources (DPR), Auwalu Sarki.

The decision to switch from Addax Petroleum Development to KEL/Salvic was conveyed in a letter signed by the Director of the DPR.

Giving a reason for re-awarding the lincense, the Buhari govt accused Addax of lack of compliance with work programme targets.

The properties are all producing assets on which royalties are being paid and revocation is hardly applied on for work programme issues, even though the government publicly frowns upon companies “sitting” on acreages without working them.

“Kaztec belongs to Emeka Offor; the Minister, Auwalu Sarki and Mamman Daura are all involved in the illegal deal. So also in the marginal field, Emeka Offor used three different names to get a lucrative field. He used Naphatha Petechemical’s name to get 91 per cent of Abiala filed, Starcrest to get 41.64 per cent of Atamba field and Naphtha to get 11 per cent of Egbolom field.

“Addax owes the Federal Government over $1.4 billion in tax and they have been in court cases since the minister decided to cancel and give it free to Emeka Offor.

“Offor is a close ally of the minister and he sponsored Sarki. Sarki was an Assistant Director and got promoted to director when the late Chief of Staff was outside the country,” a top source revealed to SaharaReporters.

“Just recently too, the DPR and the minister went against the approval of the President to award OML 110 that originally belonged to Cavendish Petroleum, due to the non-payment of renewal fee of $2million, to Bua Abdulsamad.

“The President in November 2020 through reference noSH/COS/24/A/9514 directed that DPR should return the block back to Cavendish, provided they pay within 90 days effective November 9. Instead of advising Cavendish, the minister through DPR awarded the block to Bua,” a source told SaharaReporters.

Recall that the federal government had dragged the Chinese-owned oil firm, Addax Petroleum Development Nigeria Ltd before the Federal High Court in Lagos over the company’s alleged under-remittance of $3 billion in taxes and royalties.

The government is claiming in the suit before Justice Mojisola Olatoregun that the sum represented outstanding claims against the oil company under the Petroleum Profit Tax Act and Petroleum (Drilling and Production) Amendment Regulation 2003 over Oil Mining Leases (OMLs) 123, 124, 126, and 137.

It also alleged the $3 billion unremitted funds came as a result of the oil multinational’s illegal and irregular reliance on Side Letters dated 21st November 2001, 20th December 2001, and 24th August 2004 which were never gazetted.