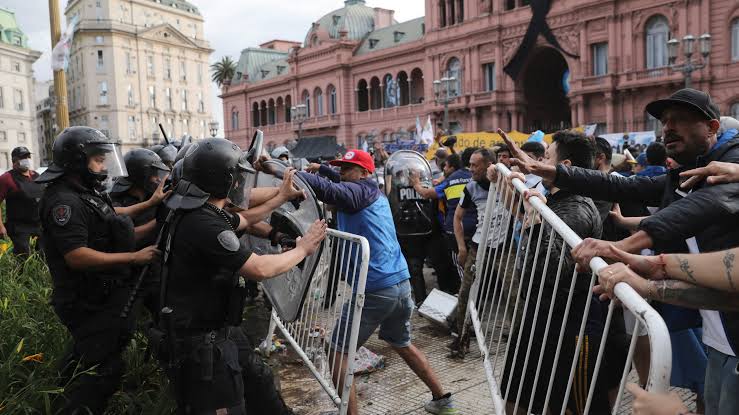 There were heavy clashes between police and mourners at the funeral of Diego Maradona as thousands gathered to bid farewell to the football legend yesterday.

The clash ensued as fans of the famous “Hand of God” wanted to catch a glimpse of his body, as they paid their last respect.

The Argentina and Napoli great, who underwent brain surgery earlier this month, died of natural causes at the age of 60 on Wednesday.

His body is lying in honour at Casa Rosada – the presidential mansion in the heart of Buenos Aires – during three days of national mourning in his homeland.

His coffin was wrapped with Argentina’s national flag and football shirt, with his number 10 on the back.

Thousands of people wishing to pay their respects joined the line at the Plaza de Mayo square, with the first in line allowed to enter the building at 06:00 local time (09:00GMT).

The wake was scheduled to last for 10 hours, with the first few reserved for Maradona’s family and former team-mates.

However, as the numbers continued to swell, officers in riot gear struggled to contain the crowds and Argentine outlet Clarin reported tear gas and water cannons being used.

US Election Was Marred With Fraud – Brazil President