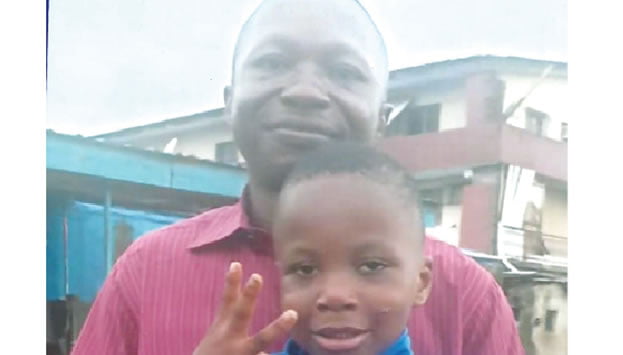 A banker identified as Princewill Njoku has been reunited with his son, Kayomikun, after struggling with his father-in-law, Godwin Osuchukwu, for four years over the custody of his child.

Information gathered revealed that the banker lost his wife in September 2015, shortly after giving birth to the child at a medical facility in the FESTAC area of Lagos State.

Osuchukwu in his statement had noted that the 42-year-old did not marry his daughter properly.

“In Igboland, if you don’t marry someone completely when she is alive, you will complete the rites when the person dies. So, Princewill should do the right thing.”

Osuchukwu was also pissed that his son-in-law gave his grandson a Yoruba name and decided to rename him Ndidi.

Princewill had written several petitions to the Lagos State Government and the National Human Rights Commission, claiming that his father-in-law planned to travel out with his son without his consent.

The case was brought before different courts as Osuchukwu also made allegations against Princewill, who produced photos as proof that he completed the traditional marriage rites for Favour.

The banker, an indigene of Umuokwaraku Umudiagba Abajah, in the Nwangele Local Government Area of Imo State, lamented how a directive from the Lagos State Directorate of Public Prosecutions to the Ajegunle Magistrates’ Court to release his son to him was frustrated.

Dr Jide Martins, the former director of DPP had released legal advice dated October 2017, where it recommended the prosecution of 72-year-old Osuchukwu for child abduction and the release of the child to the banker.

The advice read in part, “The facts contained in the duplicate case file reveal that after the death of his wife, Princewill Njoku gave his in-laws his baby boy, Kayomikun Chimdinso Destiny Sunday Patrick Njoku, who was in the care of his sister, Charity Njoku.”

“On December 27, 2015, he went to pick his son from his in-laws, but his father-in-law, Godwin Osuchukwu, refused to release his son to him. He (Osuchukwu) also confessed to have denied him the possession of his son. From 2015 till date (2017), Osuchukwu has still not released his son to him.”

“The suspect confessed to have detained Princewill Njoku’s son, Kayomikun, against his father’s will, and he still insists on not returning him despite various meetings and court interventions.”

“In light of the foregoing, Godwin Osuchukwu should be prosecuted at the magistrates’ court for the offence of abduction or unlawful removal.”

The case, was, however, frustrated, as the case dragged on.

Princewill was said to have written several petitions to the Attorney-General of Lagos State, the state Commissioner of Police and the DPP, calling for the activation of the legal advice.

The police in its reaction noted that the legal advice could not be found in the case file. The banker was advised to write a letter, seeking the advice to be resent to the police, which he did.

Three years after, the police reportedly indicated readiness to prosecute Osuchukwu, as his family began moves to resolve the matter.

He said, “My father-in-law’s lawyer had boasted to us in court that we could not do anything with the legal advice because he felt that they had bought their way through to suppress the case from coming up.”

“But the DPP had got marching orders from the Lagos State Attorney-General and Commissioner of Justice to look into the case.”

“After obtaining a new copy of the legal advice, the X-Squad also swung into action to prosecute him after over three years’ delay. The case was transferred to the Yaba Magistrates’ Court.”

“My father-in-law afterwards said that his dead mother appeared three times to warn his family of the dangerous waters they were treading, and he, as a father, wanted to right the wrongs in his lifetime.

“I give God the glory for disgracing all those who put impediments on the path of the truth coming out. I was able to get my son back without struggling for it. The day he was returned coincidentally was my birthday.”