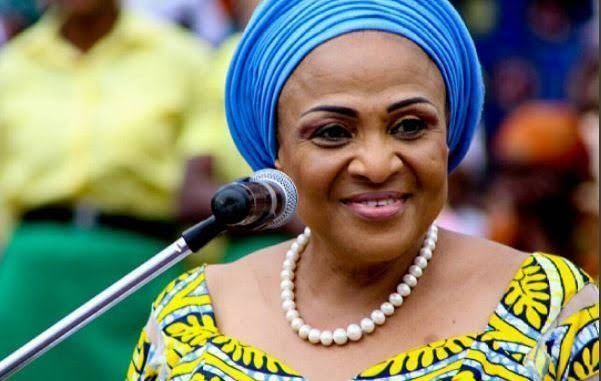 The Deputy Governor of Oyo State, Rauf Olaniyan, has explained why the widow of former Governor Abiola Ajimobi, Mrs. Florence, was angry during her late husband’s burial.

Recall that Dr. Florence Ajimobi, while receiving a delegation of the Oyo State Government led by the deputy governor, was seen furiously angry at Seyi Makinde led administration over controversies of her husband’s death and burial ceremony.

The bereaved widow lambasted the current administration in Oyo state, led by Engr Seyi Makinde for the way it handled the case of her husband when he was sick.

The visibly angry widow denied ever contacting either Governor Makinde or anybody in his government for any kind of support during the illness of her husband which eventually resulted in his death. She denied the state government’s claims that the family sent a proxy to meet the governor during the burial arrangement of her husband.

Speaking on Saturday when the leadership of the South-West Group of Online Publishers paid him a Sallah visit, Olaniyan said he knew the widow was grieving, insisting that he was not angry with her.

He said he had nothing against the family, adding that the widow had called him and they had settled everything.

Olaniyan stated, “I was not angry with Mrs Ajimobi and the family. I had no premonition that something like that was going to happen.

“I cautioned the ADC and Chief Detail after we got there that nobody must be touched. I told them to keep their heads when others were losing theirs.

“She ( Mrs Ajimobi) has called and we have settled everything. I understand her, she was grieving, mourning the death of her husband. We don’t know the enormity of that grief.”