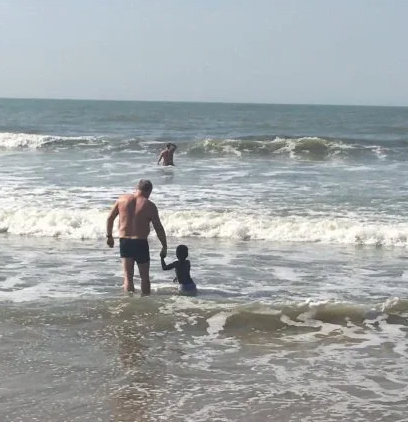 British paedophiles are buying Gambian children for as little as £2-a-time, a UK reporter has uncovered.

The reporter uncovered that many of the predators are embarking on sick child abuse holiday where they openly pick on little boys and girls.

The reporter who works with sun online visited the beach resorts, dot Kololi on the country’s picturesque Atlantic coastline, where he saw first hand how poor Gambian children are been used by the paedophiles.

A number of middle-aged Caucasian men were said to have been seen with little African children.

The undercover journalist witnessed a six or eight-year-old girl having lunch with a balding, white-haired man, who isn’t her biological father

The reporter also saw a stoutly built man in his 50s or 60s wading into the ocean gripping the hand of a tiny African child in white swimming shorts.

The reporter further noted the sight of a Gambian toddler, about 2 years old, being carried by a white man around 11:30pm at night.

Experts warn that the economic crisis unleashed by the collapse of travel firm Thomas Cook is helping turn the former British colony into a “paedophile paradise” where perverts can operate unchecked.

While speaking in an interview with The Sun UK, the National Coordinator of the Child Protection Alliance in The Gambia, Lamin Fatty, said the white tourists are targeting African minors.

He warns: “Sex is cheap in my country and children are being sold for as little as 150 dalasis, or just over £2 in your currency.

“Some of the parents know their children are being abused and they accept it because they are so desperate for food in their bellies. Others are too naïve to realise. They think the Westerner is paying their bills and helping their boy or girl out of the kindness of their heart, while in reality they have bad intentions.
“Child abuse is going on all the time in The Gambia and the government is not doing enough to put a stop to it.

“Our children are being approached directly on the beaches or the street and child abusers from all over Europe including the UK are coming here for this.

“I want to make clear that this does not just involve men but also adult women who are paying for sex with teenage boys in The Gambia.

“We have laws that are supposed to stop this from happening but they are not being enforced so we have become a paradise for paedophiles.”

Lawyer and children’s rights advocate Malick Jallow told Sun Online: “While some tourists will always want to help poor Gambians, others will see this situation as an opportunity to exploit young children.

He noted that the problem is that the abuse of the children has the support of the parents.

“The perception is that white people, or ‘toubabs’ as they call them, have stacks of cash and these parents are often excited that their child has attracted the attention of a white man.

Father-of-four Abdullah Labamba, 48, who runs a fruit stand next to one of the many hotels that line Kololi’s palm-tree fringed beach, says he has witnessed paedophiles targeting vulnerable child workers selling peanuts for less than £1 a bag.]

He said: “I’ve seen white men approach the little boys and girls right here on the beach. I do my best to stop them.

He said often tells them to leave and explains that it inst a safe place for them.

He said it is shocking but the children normally come back.

“Their parents are desperate for money and they know they won’t be allowed home until they have sold at least five bags.

“Some men try to take advantage of that by offering them £50 for the whole basket. Then they will ask them to come back to go somewhere private.”

Previous research has shown that paedophiles often pose as charity workers and Good Samaritans so they can befriend poor families — and UNICEF has warned that The Gambia is one of Africa’s top destinations for child sex tourism.