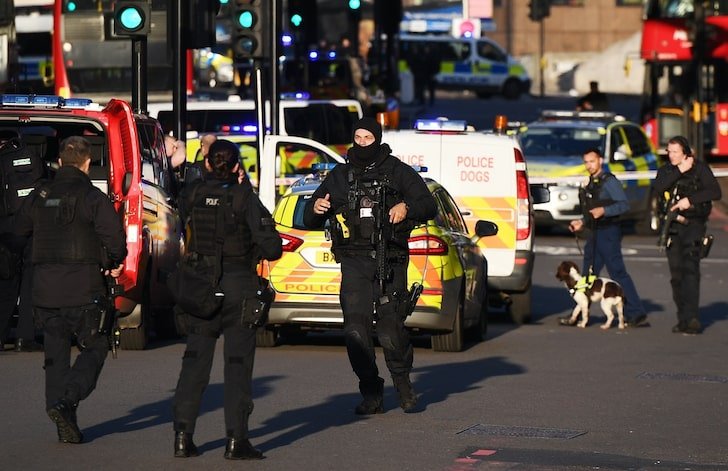 The man who killed two people with a knife Friday at London Bridge has been identified 28-year-old Usman Khan, a former prisoner convicted of terrorism, the chief of British anti-terrorism, Neil Basu, said on Saturday.

“This individual was known to the authorities, having been convicted in 2012 for terrorist offences. He was released on parole in December 2018,” said the police chief in a statement, adding that a search was underway in a location in Staffordshire County, central England.

Before the start of a meeting of the government’s Crisis Committee (Cobra) in the evening, Prime Minister Boris Johnson said he had “long ago” said that “it is a mistake to allow violent criminals to get out of jail. anticipated manner “.

Three people were also wounded in the attack at the very spot where an attack had already taken place in 2017, said the head of Scotland Yard, Cressida Dick, in front of the press.

“We are also working tirelessly to understand what happened and if other people are involved,” she added, adding that the police presence on the streets would be strengthened in the coming days.

According to the head of the British Public Health Service (NHS), Simon Stevens, one person is in a “critical but stable” state, another in “a stable state”, and a third has suffered “less serious injuries”.

After this attack, the Conservative, Labor and Liberal-Democratic parties temporarily suspended their campaign.

Police said they were called at 13:58 (local time) for a knife attack near London Bridge, a bridge and a major station in the centre of the British capital. The area, where there are many offices and places of exit, will remain buckled “a certain time”, according to the police.

Several passersby were hailed as “heroes” by police and politicians for rushing and fighting with the attacker, according to video recorded by witnesses and broadcast on social networks.

“We did everything we could to try to pull his knife away from him so that he would not hurt anyone else,” BBC guide Stevie Hurst said of the speakers.

One man, in particular, was greeted on social networks. In several matching videos circulating on Twitter, he is seen coming out of the fray with a knife in his hand, shouting at other witnesses to back down.

“Some of the guys on [the assailant] were ex-prisoners and they were all at Fishmonger’s Hall,” said Jamie Bakhit, a 24-year-old housekeeper quoted by PA, as saying maintained with one of the speakers.

The United Kingdom received messages of support from abroad, including the White House, which “strongly condemned all horrific violence against innocent people”.

“Very saddened”, the new President of the European Council, Charles Michel, said that “the fight against terrorism is a common battle”.

In June 2017, a pickup truck hit the crowd on the London Bridge, before its three occupants stabbed passersby in the Borough Market. Balance: eight dead and fifty wounded.

It was one of the attacks claimed by the Islamic State jihadist group that hit the United Kingdom that year.

In March 2017, a man had entered the crowd with his vehicle on the Westminster Bridge before stabbing a police officer deadly in front of the Parliament, killing a total of five.

Two months later, 22 people – including children – were killed in an attack at the end of an Ariana Grande concert in Manchester.

Since then, the terrorist threat seemed to have receded slightly: in early November, the level of terrorist alert in the United Kingdom had been lowered from “serious” to “substantial”, the risk of an attack being now considered “likely” and not “highly likely”.