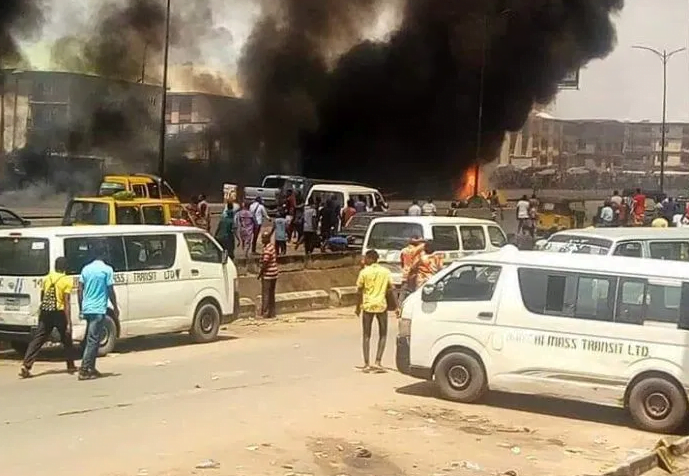 A woman and her child suspected to be between three and eight months were feared dead, while no fewer than 40 buildings, ranging from two- storey to four-storey buildings were razed in a tanker explosion in Upper Iweka, Onitsha, Anambra state.

Naija News reports that the tragedy struck at the Onitsha main market after a truck conveying premium motor spirit (PMS) lost control and rammed into the fence of Toronto Hospital, Upper-Iweka, Onitsha.

This online news platform learned that no fewer than 40 buildings, ranging from two- storey to four-storey buildings were razed in the tanker explosion.

Over 500 lock- up shops were also gutted by the fire along with the Iweka street market leading to Ochanja and Menax market.

An eye witness in a report revealed that no fewer than four persons have so far died in the incident as the fire later spread to Ochanga Market, Onitsha.

“The fire started in front of Toronto Hospital Onitsha, before it spread to Ochanga Market area.

“I saw four lifeless persons, while a number of persons are still trapped in a building still burning,” he said.

Click HERE to check the graphic photo of the deceased.