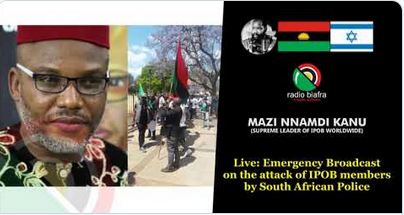 The full audio of the “emergency broadcast” of the leader of the outlawed Indigenous People of Biafra (IPOB), Nnamdi Kanu, has emerged.

Naija News reports that the IPOB leader held the broadcast on Thursday on Radio Biafra, where he condemned President Muhammadu Buhari‘s recent visit to South Africa over the xenophobic attacks on Nigerians.

This online news platform recalls that President Buhari arrived in South Africa on Thursday, where he held a crucial meeting with the South African President, Cyril Ramaphosa over the attack.

During the broadcast, Kanu berated President Ramaphosa over the xenophobic attacks on Nigerians in South Africa while stating that Buhari whom he once again referred to as a “Sudanese impostor” will not know peace.

“A thoroughly ugly and distasteful development that pales White apartheid regime into insignificance in terms of its brutality and incredulity.

“We hereby place it on record that this Sudanese impostor Jubril Al-Sudani on whose account Cyril Ramaphosa ordered his police to open fire on peaceful Biafran protesters will never know peace, neither will Abba Kyari’s cabal in Aso Rock that has reduced Nigeria to an archetypal impoverished, backward 19th century Fulani emirate.

“Let them know that Jubril will be disgraced, hounded and exposed in every country he sets foot upon even if it happens to be in totalitarian glorified Banana republics in Africa.

“The crass display of primitive police brutality and anti-democratic antecedents of the South African police is confirmation if any is needed, that black Africa is hopeless and doomed,” Kanu said.

Listen to the full audio below…