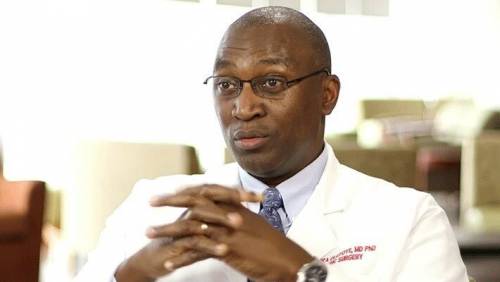 A Nigerian born Doctor, Oluyinka Olutoye has been appointed Surgeon-in-Chief of the  Nationwide Children’s Hospital in Ohio United States.

The report on the appointment of the Nigerian, who is a pediatrician, which took effect from August 1 2019, was monitored on TheCable by Naija News.

Managing Director and Chief Medical Officer at the hospital, Richard Brilli, said the management were ‘tremendously delighted’ to have Dr Olutoye’s experience on their team.

He said, “We are tremendously delighted to welcome Dr Olutoye to Nationwide Children’s Hospital to further elevate the visibility and reputation of one of the best overall children’s surgical programs in the country that through its clinical care and research, is forging the future of children’s surgery.

He will also be appointed professor and the E. Thomas Boles chair of pediatric surgery at The Ohio State University College of Medicine.

Dr. Olutoye will serve as the primary surgical liaison between Nationwide Children’s and the OSU College of Medicine.

Dr. Olutoye received his medical degree from Obafemi Awolowo University in Ile-Ife, Nigeria, and earned his PhD in anatomy from Virginia Commonwealth University in Richmond, VA.

He completed his residency in general surgery at the Medical College of Virginia Hospitals, Virginia Commonwealth University, and his fellowships in pediatric and fetal surgery at The Children’s Hospital of Philadelphia in Philadelphia, PA.