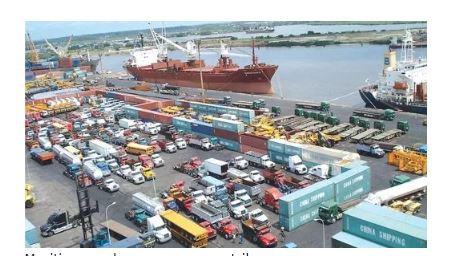 Maritime workers in Nigeria have suspended all port activities in the country’s ports following the commencement of a nationwide strike by the Maritime Workers Union (MWUN).

Naija News reports that the action of the workers is followed by the expiration of the 14-day ultimatum issued to the federal government to compel the international oil companies to pay outstanding wages to workers, among other issues.

The union demands from the federal ministry of transportation to ensure that all outstanding wages are paid and all other related issues addressed within two weeks; a demand the ministry failed to successfully meet

The President-General of MWUN, Abdul-Waheed Adeyanju, made this known in a statement issued in Lagos.

According to him, the leadership of the union has directed that members of the union shall withdraw services throughout the nation’s seaports with effect from 06.00 hours on Wednesday, July 3, 2019.

Adeyanju noted that the two-weeks notice had elapsed on Friday, June 28, stressing that there was no indication that the issue was being addressed.