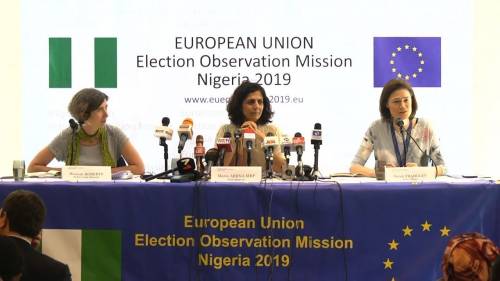 The European Union Election Observation Mission has berated the operation of Nigeria electoral body and other key stakeholders in the last general elections.

Naija News learnt that the international observer agency noted there were shortcomings in INEC’s operations while leading political parties were at fault for not controlling their supporters who unleashed violence on electorates.

The security agencies were also scolded for not preventing violence and in some areas were said to be culpable in maltreating electorates and electoral personnel.

Meanwhile, In the report presented today, the agency gave 30 recommendations to the Independent National Electoral Commission (INEC), which it says would help to improve future elections and restore faith in the process.

The #EU Election Observation Mission has released its final report on Nigeria's 2019 elections, stressing an urgent need to improve the electoral process and restore faith in the system. The report contains 30 recommendations for improved future elections. pic.twitter.com/b00eZjfvWW

The EU report, which was read by the Head of Mission, Maria Arena also called for more transparency in the operations of the commission moving forward.

The mission, which also threw its weight behind INEC planned dialogue on the electoral process in the country, also concluded that the systemic failings are seen in the elections, and the relatively low levels of voter participation, show the need for fundamental electoral reform.

”Such reform needs political leadership that is dedicated to the rights of Nigerian citizens, and an inclusive process of national dialogue involving state institutions, parties, civil society and the media,” said EU Chief Observer, Maria Arena, at a press conference in Abuja.

”This needs to be urgently undertaken to allow time for debate, legislative changes and implementation well in advance of the next elections,” she added.

“Overall, the EU EOM concluded the 2019 elections were marked by severe operational and transparency shortcomings, electoral security problems and low turnout. Positively, however, the elections were competitive, parties were able to campaign and civil society enhanced accountability.

Leading parties, the EU EOM said: “were at fault in not reining in acts of violence and intimidation by their supporters, and abuse of incumbency at federal and state levels.”

The EU EOM’s report stated that, “except for federal radio, state media primarily served the interests of the president or the governor at state level, journalists were subjected to harassment, and scrutiny of the electoral process was at times compromised with some independent observers being obstructed in their work, including by security agencies.”

The EU EOM noted that NEC worked in a difficult environment and made some improvements, such as simplifying voting procedures.

”However, considerable weaknesses remained. Operational deficiencies led to the postponement of the elections, there were insufficient checks and transparency in the results process, as well as a general lack of public communication and information.

“The elections became increasingly marred by violence and intimidation, with the role of the security agencies becoming more contentious as the process progressed.

”The EU EOM reported that this damaged the integrity of the electoral process and may deter future participation. During collation of the federal results, EU observers directly witnessed or received reports of intimidation of [NEC officials in 20 states.

“While the legal framework broadly provides for democratic elections and some improvements were made to the Constitution, various legal shortcomings remained, including in relation to the use of smart card readers.

”The EU EOM also noted the suspension of the chief justice by the president a few weeks before the elections, which it said was seen to lack due process and reportedly undermined judicial independence.

“Other issues highlighted in the report include: conflicting and late rulings on electoral disputes that undermined opportunity for remedy and created uncertainty; the dysfunctional regulation of political finance; very few electoral offences resulting in arrest or prosecution; problems With the collection of permanent voter cards; and the further fall in the number of women elected.”

The report, however, noted that parties and candidates were able to campaign, with freedoms of assembly. expression and movement were largely respected.

The EU EOM also emphasized the effective role played by civil society organisations in promoting election reform and positively contributing to the accountability of the process.

The report highlighted seven priority areas from the 30 recommendations for consideration which are the need to “Strengthen INEC procedures for the collation of results to improve integrity and confidence in electoral outcomes. Establish requirements in law for full results transparency, with data easily accessible to the public.

“Considerably strengthen lNEC’s organizational and operational capacity, as well as its Internal communication.

“The inter-agency body responsible for electoral security to work more transparently and inclusively, with regular consultations with political parties and civil society. “Introduce a legal requirement for political parties to have a minimum representation of women among candidates.

“Electoral tribunals to also cover pre-election cases in order to improve access to remedy and to avoid petitions being taken to different courts at the same time.

“Reform the licensing system for the broadcast media to provide for media pluralism and diversity all of Nigeria’s states.”

The mission’s 40 long-term observers went to all 36 states and the Federal Capital Territory.