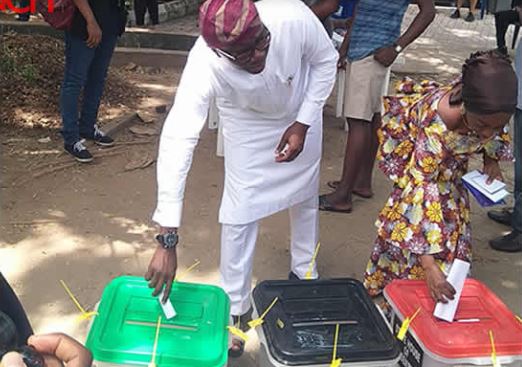 The candidate of the All Progressives Congress (APC) in Lagos State, Babajide Sanwo-Olu, has taken an impressive lead over 44 other candidates in the governorship election held on Saturday.

In the 15 LGAs announced so far, APC is leading, while the candidate of the Peoples Democratic Party, Jimi Agbaje, polled the second highest votes in the respective LGAs.

The announcement of results is taking place at INEC head office, which is also the collation centre, located at Yaba, Lagos.

Others are Somolu, Eti Osa, Oshodi/Isolo, Mushin, Kosofe and Surulere.

INEC Returning Officer in the state, Prof Eyitope Ogunmodede, who is also the Vice-Chancellor of Obafemi Awolowo University, Ile Ife, had at the beginning of the exercise promised to be fair to all.