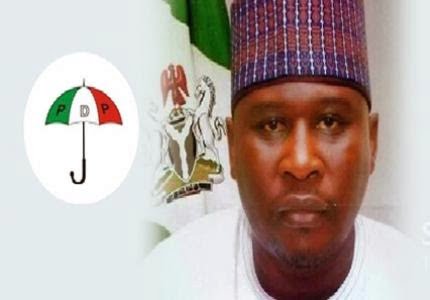 While speaking at the occasion in Yola, Fintiri expressed delight over the decision of the 10 governorship candidates and said that the coast is now clear for PDP to win the governorship election considering the popularity of the candidates that joined his campaign in the state to restored democracy.

He said that his government will be a government of national unity, pointing out that everybody that has good plans to move the state forward will be given the opportunity to contribute his quota to the development of Adamawa

The 10 governorship candidates who took turns to speak at the occasion revealed that their decision was taken in the interest of the people, noting that the only way to rescue power from APC government is to join forces with the PDP candidate in the state.

Mrs Isa, the CAP candidate said she decided to shelve her ambition to work with Mr Fintiri because she believed in his vision and that of the PDP.

She described the PDP candidate as a man who matched words with action, as evident in his stewardship when he served as Speaker of Adamawa State House of Assembly and acting governor.

“I go for personality, and Fintiri is a man of vision and integrity,” Isa said.  On his part, KOWA party candidate, Mr Umar, said his party only endorsed Fintiri for the governorship election, but its candidates for the house were still in the race. “Unlike other parties, our party will mobilise for PDP for governorship only, while our house of assembly candidates are still in the race,” he said.