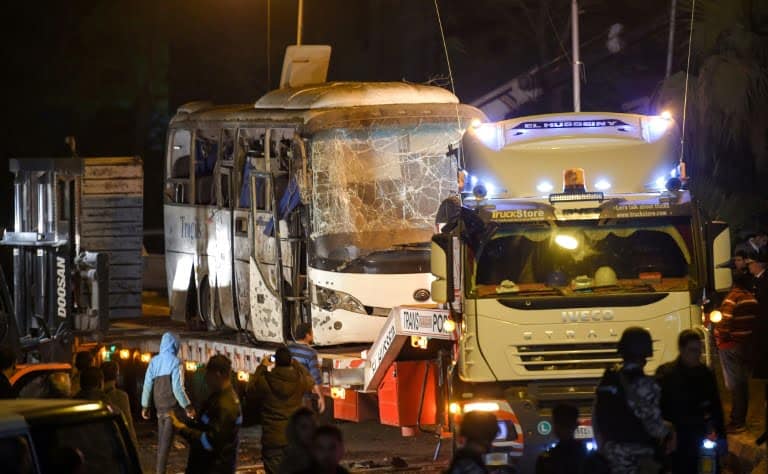 A photo taken on December 28, 2018 shows a Vietnamese tourist bus damaged after a deadly bomb attack in the Giza region, near Cairo

Security forces Saturday killed 40 suspected jihadists in raids in Egypt following a deadly attack on Vietnamese tourists, the first in more than a year in a country that has made the fight against terrorism a priority absolute.

On Friday, three Vietnamese tourists were killed as well as their Egyptian guide in the explosion of a roadside bomb on their bus near the site of the Giza Pyramids, on the southwest outskirts of the Egyptian capital.

According to the prosecutor general, an investigation was opened into the attack, which also injured 11 tourists and the bus driver.

Several foreign countries have expressed their support for Egypt, including the United States, as well as the European Union. Pope Francis said he was “deeply saddened” and “confident that all will work to overcome violence with solidarity and peace,” according to a Vatican telegram.

The Egyptian Ministry of the Interior announced raids in the Giza region and north-east Sinai in the early hours of Saturday, where the Islamic State (IS) jihadist group is located.

“Forty terrorists were killed,” 30 in the Giza region and 10 in North Sinai, according to the same source. “They were planning a series of attacks against state institutions,” including the tourism sector, Christian places of worship and security forces.

The ministry did not directly link the police raids to the Friday attack that has not yet been claimed, but a security source said they had taken place following the attack. The latter occurred as authorities recently increased security due to Christmas celebrations.

Since February, security forces have been conducting an offensive against ISIS, including in the North Sinai area, where about 500 jihadists have been killed, according to the military.

Attacks have increased in Egypt since the removal of Islamist President Mohamed Morsi by the army in 2013, particularly against the security forces and the Coptic Christian minority.

Friday’s attack is the first against tourists since July 2017. The crucial tourism sector has suffered from political instability and attacks by extremist groups, including ISIS, following the popular uprising of January 2011 which has ousted President Hosni Mubarak.

“The attack c the Egyptian government’s strong message that the country is safe for tourists,” Zack Gold, an expert on Middle East security issues and analyst at the CNA research center, told Nigeria News. in the USA.

As usual, the Egyptian media relayed Saturday, on television and on the networks, photos of jihadists allegedly killed. They show bloodied men, a weapon in their hands, their faces blurred, lying in rudimentary hiding places.

But these media, under close control of the state, briefly evoked the attack, a sensitive issue in Egypt where power is a major ally of the Western powers in the fight against terrorism.

“We were all very shocked,” Nguyen Nguyen Vu, 47, a brother of one of the tourists killed, Nguyen Thuy Quynh, 56, told Nigeria News.

He said he heard the news in the night, by a call from his brother-in-law, the injured Duke Minh and hospitalized at Al-Haram Hospital, near the scene of the tragedy.

Nguyen Nguyen Vu plans to obtain a visa to go quickly to Cairo and “bring home her sister”.

According to Saigon Tourist, the travel company that organized the stay, the tourists went to a restaurant to have dinner at the time of the attack. Company officials are expected in Cairo.

The Egyptian Ministry of Tourism has announced that it is in contact with the Vietnamese embassy to “facilitate the travel procedures of the wounded families wishing to travel to Egypt”.

The biggest recent attack on tourists, which hit hardest in the tourism sector, dates back to October 31, 2015.

ISIS claimed responsibility for a bombing that killed the 224 occupants of a Russian plane carrying Russian tourists after taking off from the seaside resort of Sharm el-Sheikh in Sinai.

Egypt had recently seen a resurgence in the tourism sector, with 8.2 million visitors in 2017, according to official figures. But the country is still far from the 14.7 million tourists of 2010.