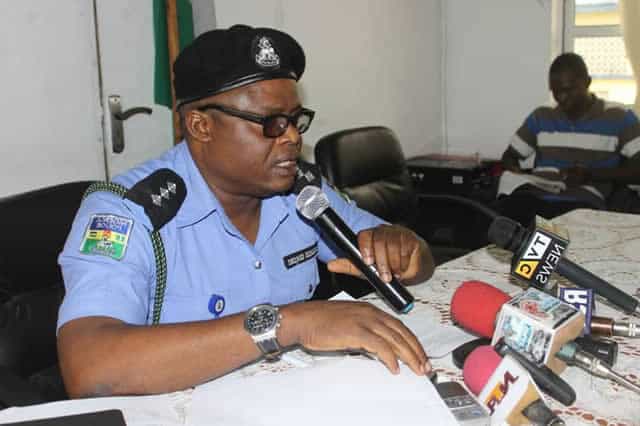 A policeman, who shot a bus passenger in Evekwu area of the East- West Road in Rivers State on December 11, 2018, has been arrested.

Many people condemned the video of a young man getting shot in the leg, which trended online for several days.

Report revealed that policemen, who were on stop and search, had requested for N100 from each commercial bus driver passing through the area.

Further report revealed that a bus driver driving a bus identified as G.U. Agofure, stated that he had no money to give to the cops, when the policemen stopped the bus.

One of the passengers came out to tell the policemen to allow the bus, which was moving people from Warri to Port Harcourt, to continue on the journey.

One of the cops who got angry shot him in the leg before the victim was taken to a hospital after much appeal to the policemen.

The Public Relations Officer of Police in the state, Nnamdi Omoni, confirmed the arrest of the cop, who shot the passenger in the leg.

He revealed that the victim has been discharged from the hospital after treatment. He claimed that the policeman had been handed over to the Criminal Investigation Department.

He pointed out that Section 237 of the Police Code that deals with how an officer/policeman should use firearm would be evoked on the suspect.

Omoni stated, “Two Agofure buses, which loaded at Warri (Delta State), were travelling to Port Harcourt when policemen, who were on stop and search, stopped the first bus. The driver of the second bus and one of the passengers came done to approach the officer.

“While they were getting close to the officers to find out why the first bus was stopped, one of the policemen shot the passenger in the leg.”