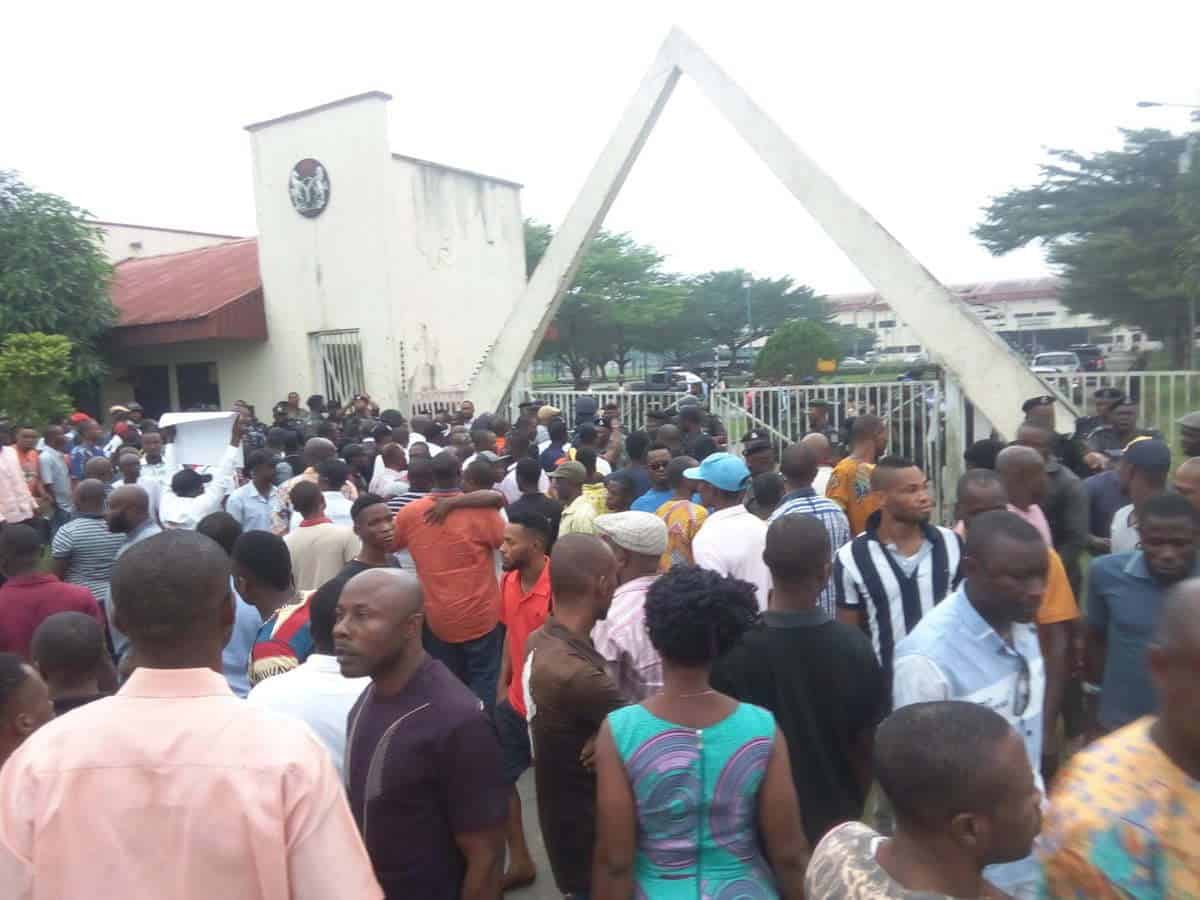 A crowd of youth, who are members of the All Progressives Congress (APC), earlier today, protested at the Akwa Ibom State House of Assembly over the sacking of a lawmaker, Idongesit Ituen, who defected from the Peoples Democratic Party (PDP) to the APC.

The protesters carried placards calling on the assembly to reinstate the sacked lawmaker who represented the Itu State Constituency.

As earlier reported by Naija News, the protesters set up bonfires on the road leading to the assembly, thereby obstructing the free flow of traffic. They were later addressed by the Commissioner of Police in the state, John Abang, who appealed to them to be peaceful.

About 10 police trucks were seen parked along the road, with several anti-riot policemen standing by.

At about 8:30a.m, the speaker of the Akwa Ibom State House of Assembly, Onofiok Luke, drove in and alighted at the entrance to the assembly complex. He tried to address the protesters, but could not as the crowd became rowdy.

Mr Luke, through the prodding of his security aides, left the protesters, slipped through the gate and went to a safe place inside the assembly premises.

Few minutes after, he entered his car and drove out of the assembly. The protesters ran after the convoy, throwing stones at the cars. The policemen attached to the speaker fired into the air to repel the protesters before the convoy sped off.

The House was scheduled to sit today, but it is unclear whether the sitting would be called off because of the protest.

As at 10:50a.m., the protest was still going on. The police were firing teargas to disperse the protesters.

“Onofiok Luke cannot get away with this, I swear!” one of the protesters said.

“Asuquo Archibong, the member representing Urue Offong/Oruko State Constituency, was elected through APC, but he defected to PDP. Why didn’t the speaker declare his seat vacant?”

Naija News recalls a federal high court in Uyo on November 14 sacked Mr Ituen after the judge dismissed the main suit filed by him and granted all the reliefs sought by the Speaker of the assembly, Onofiok Luke, who was one of the defendants in the suit.

Mr Ituen had wanted the court to restrain the speaker from declaring his seat in the assembly vacant because of his defection. The sacked lawmaker has appealed the judgment.