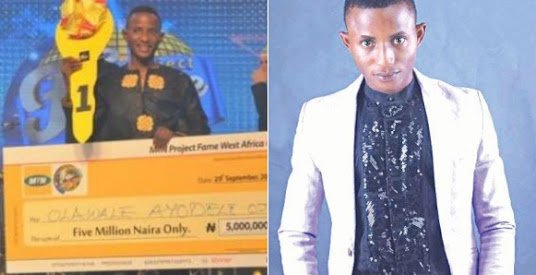 Ojo Said Things Didn’t Turn Out The Way He Expected

The winner of the 2013 MTN Project, Olawale Ojo, has revealed why he took the step to turn into a cab driver in Lagos as a means of making ends meet.

During an interview with Channels Television’s programme, Rubbin Minds, he stated that despite emerging as the winner of the sixth edition of the show, he ended up becoming a cab driver to stop depression.

“For a short while, I felt depressed. I had the option of giving someone this car to probably drive for me,” he said.

He added further that he has been into the cab driving business for “Couple of months in Lagos.”

According to Ojo, he stated that maintaining stardom is a difficult task and had tried every means to sustain his fame.

He stated that he regretted that life has not being treating him well despite making attempts to release an album in 2014 where he featured Tiwa Savage, Skales and Lil Kesh.

“I won an SUV, N5m and a recording contract. Personally, I thought from Project Fame, I was going to blow up like that. That was what everybody expected.

“I put up an album after the show in 2014 and that was part of the contract. I featured Tiwa Savage, Skales and Lil Kesh in the album. I shot two videos.

“Everything just started playing out like that. It got to a stage when life hit me. Things were not working out the way I thought,” he explained.

Ojo’s comments come few days after a video of him went viral on Instagram stating his ordeals after stardom in 2013.

In a short video posted on Instagram by Tope Delano, the reality show star narrated how he had to fight depression when music wasn’t going the way he expected.

He further narrated how he had to make a choice on selling the car he won after emerging tops at the Project Fame West Africa in 2013.

Watch his interview below: