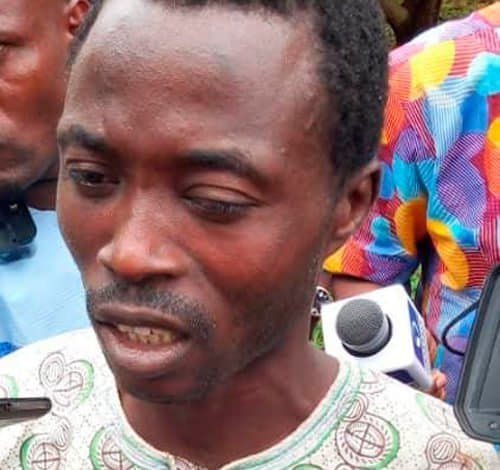 A murder suspect, Omoniyi Ademola, has revealed why he killed a traditional ruler in Ekiti State. Oba Gbadebo Ogunsakin, of Odo-Oro-Ekiti.

Naija News recalls that 80 year old traditional ruler was stabbed to death on Monday, after chairing a meeting of his of chiefs in the palace.

The suspect was said to have stabbed the monarch on his chest. Oba Ogunsakin died while being taken to the hospital. The suspect fled to Ado-Ekiti but was arrested at Ajowa Market in Dallimore area of the city around 4.30 pm same day.

Speaking while being paraded alongside suspects arrested for various crimes at the police headquarters in Ado Ekiti on Friday, Ademola, who is in his 40s, said he attacked the monarch in order to claim his “right.”

Ademola, who spoke fluent English, was said to be a member of a royal family in the community. He claimed that his family had nominated him to take over from the late king whom he said was serving as a hindrance.

In his words, “The crown didn’t belong to Oba Ogunsakin because the town last year declared the stool vacant.

“They said our Oba was dead and my family nominated me to take over only for him to resurface again and said he remained the Oba.

“Last December, my family nominated me and since then I have been trying to take over(the throne). That day when I got to the palace, it was the Oba that first attacked me and I attacked him back which led to his death.”

Earlier, the Commissioner of Police, Mr. Bello Ahmed, during a press conference disclosed the recent breakthroughs recorded by the command.

The police chief dismissed claims in some quarters that the suspect is mentally unstable.

Ahmed said: ““I am not a medical expert to know who is mentally unstable or not. “But the fact remains that, how could a lunatic committed murder and ran over 100 kilometers from the scene of the incident?

“So, common sense dictates that he must have known what he was doing to have fled from that town to Ado Ekiti.”

Answering question on the killing of former Commissioner on the board of the Federal Character Commission, Mr. Bunmi Ojo on August 10, the CP said the command was making progress with some arrests made.

He added: “We are on the trail of the killers, we have reached advanced stage. Some suspects had been arrested and they are helping the police.

“Efforts are being intensified and we shall feed the public with the right information when we are ready to charge them to court.”

The Nation reports that the Police also paraded 25 other suspects, who were arrested for cultism and other murder cases, including a man, Toyin Ajakaye, who allegedly killed a commercial motorcyclist in his farm in Agbado Ekiti on Wednesday.