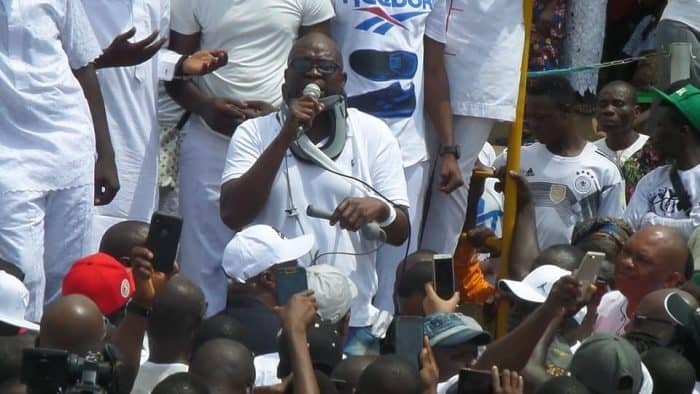 Fayose Cries As He Accuses Inspector General Of His Brutal Attack

Governor Ayodele Fayose has cried out over the brutal attack on him today at the just concluded PDP rally in the state.

Naija News learnt that the Governor stated this after the brutal attack  that saw the security operatives  dispersing the  supporters of the Peoples Democratic Party (PDP) from the venue of the party’s rally ahead of the governorship election in the state.

The governor also alleged that police officers have instructions to kill him or the party’s candidate in order to influence the party’s election. He called on the international community to come to the aid of the state which he said is under siege.

He said, “My people, the Lord will fight this battle. The Nigerian Police and the AIG ordered that the governor should be killed. I was slapped by a policeman who kicked me and shot at me, but I want you all to be strong and be of great courage. Do not be dismayed.

“This battle must be won. This is army of occupation. They have come to occupy our land. This is not the democracy we asked for. I want you to stand and remain standing. Don’t be afraid. Remain and face them.

“I pray that they’ll not cause 1983 problem in Ekiti. I call on the international community, Ekiti is under seige. The PDP men are being arrested every day. How can I be a governor of Ekiti State and be treated like this in our own country? My people, I call on all of you, stand and keep standing. Stand for justice. Stand for this election. Stand with Eleka and stand with PDP. By the grace of God, you will celebrate.

The PDP Governorship Aspirant  and other PDP elders in the state  while reacting to the brutal attack  said that enough is enough by the federal government in intimidating us.

They begged Ekiti people to forgive them and promised that they are not on a REVENGE mission but yet executing & applauding (so-called) retaliatory MISSIONS. How do you separate Retaliation 4rm Revenge? Both are next 2 DESTRUCTION in d @APCNigeria Playbook. E mura si #Ekiti2018

The governor’s aide, Lere Olayinka, who confirmed the incident through  his Twitter account (@OlayinkaLere)  disclosed that the governor received treatment at the Government House clinic after he was hit by a teargas canister fired by policemen.

Gov Fayose, a few minutes ago escaped plot to assassinate him by Fayemi and his APC.
He is currently receiving treatment at govt house clinic after he was hit by teargas canister fired by the policemen.
The armed policeme still laying siege at the Govt House.