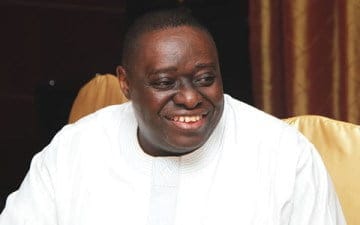 Encomiums Continue To Pour In For Late Wale Aboderin

President Muhammadu Buhari has sent his heart felt condolences to the family of Mr Gbadebowale Aboderin over his death, while describing him as a respected entrepreneur and philanthropist.

Through his Senior Special Assistant on Media and Publicity, Garba Shehu, the President noted that Aboderin would be remembered for his resourcefulness, managerial proficiency and invaluable contributions to the media and sports industry.

The statement read, “The President prays that God Almighty will comfort all who mourn him and grant his soul eternal rest. The President equally commiserates with all members of the Newspaper Proprietors Association of Nigeria, the media and sports industry in the country on the death of the respected entrepreneur and philanthropist.’’

Saraki, in a statement issued by his Special Adviser on Media and Publicity, Yusuph Olaniyonu, described the deceased as a philanthropist, sports lover and a businessman “who left indelible footprints on the sands of time.’’

Saraki said, “It is indeed painful that he left us at a time his rich experience is needed to move the country forward. My heart goes out to his wife, Titilayo, his children, the Punch Newspaper Group, the media industry in Nigeria and the government and people of Oyo and Lagos states on the sad incident.”

Also, Governor Ifeanyi Okowa of Delta State sent his condolences to the family, management and staff of Punch Nigeria Limited, and members of the Newspapers Proprietors Association of Nigeria (NPAN), the media and sports industry in the country on the death of the respected entrepreneur and philanthropist.

Governor Okowa in a statement by his Chief Press Secretary, Charles Aniagwu said “On behalf of the Government and people of Delta State, I identify with the Aboderin family, the Nigerian Union of Journalists,Newspapers Proprietors Association of Nigeria (NPAN), the entire staff and management of Punch Newspapers over the irreparable loss”.

“He was a committed journalist, publisher and philanthropist whose commitment to the welfare of his staff truly distinguished Punch Newspaper as an industry leader and pacesetter.

“As we mourn his painful departure, I pray that God will bring solace to his family who will miss him the most and grant him eternal rest.” the Governor said.

As reported by Naija News, the Punch boss, Aboderin died at the age of 60 after a heart surgery.