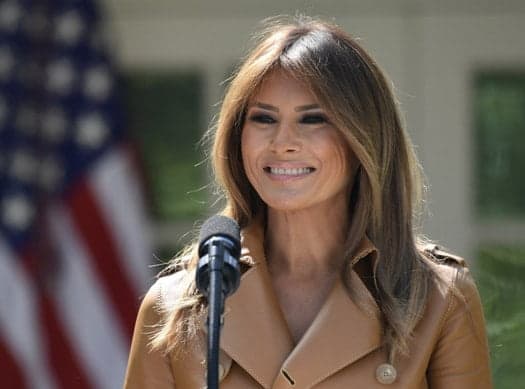 The Procedure which took place at at Walter Reed National Military Medical Center, was said to be “was successful and there were no complications.” according to a source from the White House.

“Embolization is considered a minimally invasive surgery, and involves cutting off blood flow to a particular part of the body.

“It’s typically used to shrink a tumor or block an aneurysm … although the White House isn’t saying why Melania needed the procedure.

“They simply referred to it as ‘a benign kidney condition,’” the reports said according to some American News outlets.

The First Lady who is presently recovering is said to remain at Walter Reed National Military Medical Centre outside of Washington for the rest of the week, according to the White House.

“The First Lady looks forward to a full recovery so she can continue her work on behalf of children everywhere,” according to the statement.

Punch reports that the procedure comes a week after Trump launched her official platform, dubbed “Be Best” — an awareness campaign focused on children’s well-being, social media use and opioid abuse.

Dr. Sanjay Gupta of CNN said Monday that while it was “unclear exactly what [Trump] had done, an embolization procedure is typically done for cancer — although it’s very clear in this statement that this was a benign condition.”

“That’s how they’ve framed it,” Gupta said of the statement from Trump’s communications director. “So it doesn’t sound like it’s any type of cancer.”

“Sometimes thyroids, or cysts, or something like that can be treated as well,” Gupta said.