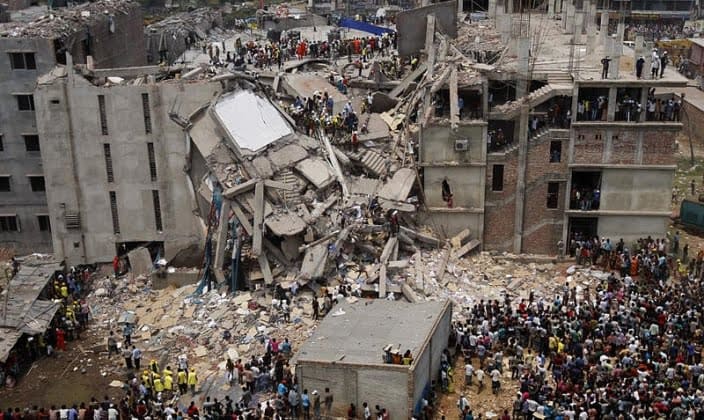 Mr Alaba Haruna, An Assistant Commissioner of Police, on Friday told a Lagos High Court that an aircraft flew over Synagogue Church of All Nations building at Ikotun-Egbe, a Lagos suburb, just before it collapsed on Sept. 12, 2014, killing 116 people.

He stated that one of his patral team observed a aircraft flying low over the church and other buildings in the premises before the collapse.

Haruna, who is one of the witness to the defence in the trial of the registered trustees of the church and four others, revealed this before Justice Lateef Lawal-Akapo of an Igbosere High Court on Lagos Island.

The church opened its defence in a one-count charge of building without approval brought against it by the Lagos State Directorate of Public Prosecutions (DPP) following the dismissal of its no-case submission on March 8, 2016.

The other defendants are the two engineers who built the building: Messrs Oladele Ogundeji and Akinbela Fatiregun, and their companies, Hardrock Construction and Engineering Company and Jandy Trust Ltd.

“On that fateful day on Sept.12, 2014 at 12.30 p.m., there was a radio communication from the police control room at Ikeja that they were receiving calls from the public of an aircraft flying at low altitude over the church.

“I was directed by the Area Command to confirm the incident and monitor the aircraft’s activities.

“I wanted to go out and direct my men to watch out for the aircraft when I received another report of an airplane flying at a very low altitude. I went outside but I couldn’t see it, by that time it had gone.

“I received a call later from Insp. Lucky Ugbaja, stationed at the church that one of the church’s buildings had collapsed.” Haruna said

According to him, the floors of the collapsed building were lying one on the other, ” the church members and others at the scene were engaged in rescue operations.

“Those I met there were church worshipers; they were bringing out so many people from under the rubble. Most of the victims were alive. Some were injured, some were not.

He said the rescue mission lasted about seven days.

During cross-examination by the prosecutor, Dr Babajide Martins, Haruna insisted that he could not recall any instance when LASEMA officials or the then Commissioner for Physical Planning, Mr Toyin Ayinde, were prevented by the church members from gaining access to the site of the collapsed building.

Meanwhile, the same court strike out a no-case submission of the Synagogue Church.