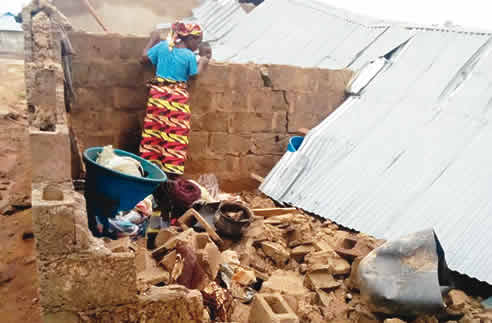 Scene of the incident

A rainstorm in Doma, has lead to the death of no fewer than five persons and over 700 structures reportedly destroyed, with schools, churches and mosques inclusive in the Nasarawa State incident.

Report has it that the rainstorm, which led to the destruction of properties and death of some residents, started around 2am on Tuesday and lasted for over four hours.

While some residents were reported to have sustained varying degrees of injury, property estimated at millions of naira were lost, some of the residents of Doma, said they had never seen such rainstorm before.

According to him, a telecoms mast reportedly owned by MTN fell on a house and killed a woman in the Lower Benue area of Doma, while a man died in the Dutun Alarama area.

He explained that the operation base of a newly established military barracks in Doma was also affected.

Mrs. Zainab Ibrahim, who also narrated the sad incident revealed that her house was destroyed by the rainstorm, adding that her family had been rendered homeless.

Ibrahim pleaded with the state government to come to the aid of the affected persons to enable them to recover from the disaster.

After the downpour, roofs of many houses were blown away, while some of the uprooted trees littered the roads.

Alhaji Rabo Sani, the Chairman of the area, promised to draw the attention of the state government to the plight of the residents, adding that the council would also assist the affected persons.

He said, “I have just gone round to see what really happened and I want to say it was pathetic. Hundreds of houses were reduced to the foundation level, schools were destroyed and worship centres were also affected. About five people died.

“We are now faced with the problems of lack of food and clothing. We urgently need assistance from government and non-governmental organisations.

“I am appealing to the state government to come to the aid of my people because thousands of them are homeless.

“If it rains again, these houses with roofs blown off will collapse because most of them are not strong enough.

“The government should provide shelter and food for the victims; this is really a serious matter.” he said.