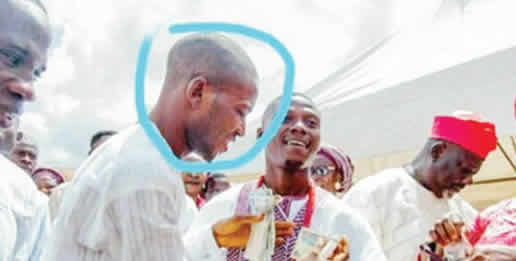 An uninvited guest at a wedding, said to be a thief, is on the run, as the Lagos State Police Command are presently on his trail.

The incidence took place last Saturday at an event hall, along Igando Road, Ojo area of the state, where the wedding held.

The suspect who was said to have been wearing white, just like the friends of the groom, was mistook as one of the groom’s friends.

Naija News learnt that the suspect picked wads of cash sprayed on the groom, Afeez Adekoya, who was still busy dancing.

The church service was on when he disappeared with large sum of money sprayed on the groom and the groom’s wristwatch.

He also reportedly carted away the phone of the best man under false pretense of safekeeping it.

His third victim was the bride’s best friend, whose phone he stole under the pretense that he wanted to send pictures she had taken at the wedding to his phone.

The groom, Adekoya explained that he was under pressure that day as the event started really late.

He said it occurred to him that the suspect was a stranger, but he thought he came with one of “my friends.”

“While we were hurrying to go for the engagement, he (the suspect) mingled with my friends. My wife and I were busy. I saw him and four of my friends collecting money. I was expecting my best man to gather all the money together, not knowing that all of them had given the money to him. They all thought the man was my friend they did not know or a family member.

“He (the suspect) came to me with a polythene bag containing N6,000. The money spent for me was really much more than that, but because of the pressure, I was not able to question him. It was already after 12pm. He followed me to where I changed my dress for the church service.

“He collected my gold wristwatch because I did not want to use it for the church service. He also collected my dress and kept it in my suitcase, which a friend later collected from him.”

Adekoya said the suspect followed his best man to the changing room, collected the clothe of his best man as he changed and took it to his best man’s wife in the car , telling her her husband asked him to collect his phone.

“After collecting the Samsung phone, which is worth N130,000, the suspect approached the bride’s best friend and told her that she had a lot of his pictures on her phone and that she should give him the phone to transfer the pictures to his phone.

“The lady was also under pressure, attending to our guests from Sagamu (Ogun State). She thought the man was my family member and gave him her phone. It was during the church service that we discovered that he had disappeared with the items,” Adekoya added.

He said he reported the case at the Iba Police Station, adding that the police promised to track down the suspect.

The bride, Abiola Folorunsho, said she initially had an impression that something was amiss with the suspect’s gesture, but she felt it would be insulting to ask for his details.

She said, “I was really angry that day. The man approached me inside a car I was and tried to pacify me. He was even trying to fan me. At that point, I wanted to ask my husband’s younger brother who he was, but I felt it would be insulting to ask such a question in his presence.

“The man gave me a handkerchief to clean my face and tried to get me food. I did not use the handkerchief because I had never seen him before. I saw him among the groom’s friends dancing. He was calling my husband ‘Egbon’ (brother) and I concluded he was my husband’s family member.

“He was everywhere, taking pictures and nobody suspected he was not invited or he had an ulterior motive. I think he banked on the pressure on us. It was our photographer who took his picture while he was dancing.”

Folorunsho said her best friend, whose phone was stolen had her thesis on the phone with no back up somewhere else.

“She is studying for her master’s degree at University of Lagos. A day before the wedding, she tried to do the backup on her Gmail account to no avail. She was weeping when she discovered the man had fled with the phone. I was destabilized too,” she added.

The Lagos State Police Public Relations Officer, SP Chike Oti, confirmed that the case was reported to the police, adding that investigation had commenced.